Damn Tony you make really good games. I love the half-pipes, flip-tricks and mad-grinds especially. But I don’t like your friends that much, they’re dumb. Why did you have to let that Jackass Bam Margera guy in the game anyway? Did he bully you like he bullies his dad? You’re rich though! You could have hired bouncers or something. Also what happened to you? Your games used to be all popular but then you had that dumb Ride thing and then did you fall off a cliff or what? When you come back from Skateistan can you make a good game please.

Warm regards from your biggest fan,

OK, OK, I didn’t actually send that, and anyway it’s just a first draft. Someday though I might send him my hand drawn map of his head done from the “folicle’s eye view”, or overhead view (pun INTENDED).

Moving swiftly on I wanted to talk about the Tony Hawk’s Pro Skater series. I am a big fan, let’s be clear. The second game got me into the series, originally on PC(!) although I’m returning to it now on Playstation 1. With Tony Hawk’s 3 I first played it on Gamecube and now again on PS2. I proceeded to lap up entries through to THUG 2 I believe, plus I had Downhill Jam on the Wii which I hoped would rejuvenate the series. By that point though the franchise fatigue had set in, and Downhill Jam was a disappointing book end I’d rather forget. And no I never played Ride, but don’t speak of it in case of some kind of divine karmic mechanism that will cause the ultimate Christmas-present-from-auntie-gone-wrong nightmare scenario. Since then, the entire franchise has pretty much collapsed. Is it any wonder really, the way they were getting churned out on every platform under the sun during the PS2 era? Activision seem to have a real knack for the churn and burn policy (CoD anyone?). 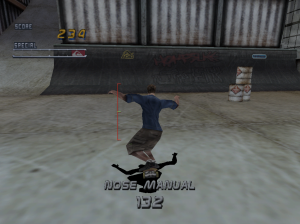 Happily, returning to the series has been great, and both of these games are compulsively (re)playable. First re-attempt at Pro Skater 3 was really sketchy though. Upon starting the first level, the camera swivelled round only to be placed directly above my character, looking directly down (the return of the folicle’s eye view I mentioned earlier). It’s the same camera angle the game uses when you jump in a half-pipe, except of course I wasn’t in one. And the camera stayed that way. In fact the camera only went back to normal while jumping in a half-pipe. Of course I’m desperately searching the options menu whilst exclaiming “what the hell” to myself trying to fix it. I tried reloading the level, which did nothing, and changing modes etc… no luck. I even completed some of the easier tasks on the first level just to unlock the next level to see if it would fix it. This is all without being able to see anything more than a skateboard’s length in front of my skater, it was ludicrous. Without my tricks I am nothing. Without my tricks I am nothing. 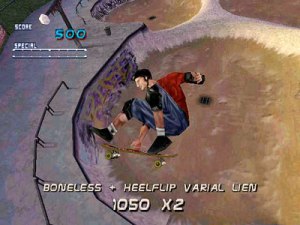 Without my tricks I am nothing. (The bug meant the camera was like this. ALL THE TIME.)

10 minutes later, and without visual sanity still I ran to Google. Turns out there is a bug in this game that requires you to remove your Playstation 2 controller, the Dual Shock 2, and replace it with a Playstation 1 controller. Inserting the original Dual Shock controller immediately fixed the camera. This is a Playstation 2 game. How can a game be buggy to the point where it won’t even accept the controller that it is intended to be played with?! Completely and utterly bewildering.

So while QA standards are evidently lower than your limboing best, the gameplay of both 2 and 3 is of course a highly addictive blend of risk-reward combos and small scale level exploration with a 2 minute time limit. The career mode, or story mode in the two games consists of 10 goals per level, typically made of some combination of the above two qualities, tricks and exploration. For the most part these are simple but satisfying, often incentivising you to explore hard-to-reach parts of the level and try and get to grips with tricks and techniques you might not usually.

Alongside the basics there are several differences between Tony Hawk’s 2 and Tony Hawk’s 3 worth talking about. While both have a silly sense of humour, the slightly increased presence of voice-acting in the levels of Pro Skater 3 makes the humour more obvious and grating at times since you’re constantly hearing the same quips over and over, although the voices of the skaters themselves are conspicuously and pleasantly absent. Why is it when skating in Los Angeles any time you come within a mile of certain people they incessantly heckle you with “hey, show me your stuff”?? “Hey, how about you leave me alone, perv, before I skate over you repeatedly,” I only wish my skater would respond. Also, at least one goal per level consists of a Jackass-style prank, something later entries in the series really ran, wiped out and landed groin first on a rail with. (Those trolley races in the THUG games… they were never a good idea, Activision.) In Pro Skater 2 the humour takes more of a backseat. It’s less intrusive and all the better for it.

Pro Skater 3 is also more accessible than its prequel. It’s more forgiving with awkward landings, for example, so you’re less likely to crash or “bail” in skater language when you make a mistake. The biggest new move in the third game is the revert, which lets you link vert or half-pipe moves into your combos. In theory this sounds like a really useful step, as vert tricks were the only moves that you couldn’t link in the second game. This works in concert with other minor changes: grinding now renews your speed no matter how slowly you’re moving, and there’s a new balance metre that helps you balance during grinds. The stats across the board have been beefed up too. By the end of the career mode your skater will be nothing short of a powerhouse.

As a result of all of the above, it is theoretically possible – and the changes in the third and subsequent entries in the series made this seem easier and easier – to keep your combo going forever. Moreover, judging by some of the high score challenges the game throws at you in the later levels (one of final level goals demands a whopping 500,000 points in two minutes), you are evidently expected to do just that. And while there is the mounting tension a big combo creates that is really enjoyable and undeniably addictive, the sheer amount of time it takes to rack up huge combos is a major reason the series became less and less enjoyable, for me at least. 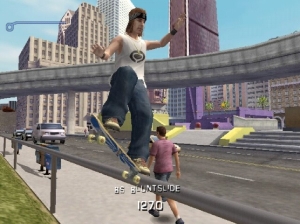 By contrast, Tony Hawk’s 2 feels slightly closer to a simulation, and you can’t get away with slip-ups like a dodgy landing. The speed is less frantic too, while skaters have weightier handling. It’s less intense in short, and weirdly enough that makes it better to my mind. I’m surprised to read myself arguing that slower and less intense is better, because typically in games I’m all about arcade-y speed and flash, and I’m sure anyone who’s played Street Fighter 2: The World Warrior alongside its faster playing successors is aware that added speed usually = better in the world of videogames. In this case though the whole package of slow changes across the series as a whole, which made the games easier, intenser and dumber was a slippery slope to turning gameplay into a rote routine of never-ending, controller-mangling grabs and grinds.

Last thing, a word on the levels. Tony Hawk’s games live or die by their levels. Tony Hawk’s 2 has some of my favourite levels in the whole series – Marseille, the Hanger and New York in particular. I love the simplicity and small size of the former two, while New York has you grinding railway tracks to access a secret section. Marseille has possibly the weirdest secret area ever in the series, and possibly in any game ever, which you access by removing a small plank which is apparently supporting the weight of an entire tree. 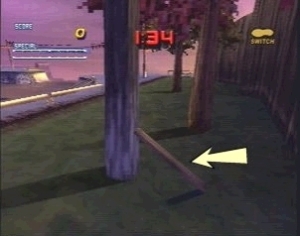 This is based on a genuine French tradition of propping up dead trees with small wooden planks, of course.

Tony Hawk’s 3 has a fair share of good-to-great levels too, including Canada, Los Angeles and the Airport, but I think 2 is stronger in this area too. Is there any area in which 3 is better? Hell, 2 even looks better graphics-wise. And 2 has a better soundtrack – Lagwagon, Bad Religion, Millencolin… this game practically created my love of punk. The couple of gems in 3 (Xzibit, Bodyjar) can’t touch this. And the game disk has a more durable case. And a better looking game manual. How many ways do I have to say it?! Without my tricks I am nothing.