This post came about thanks to an argument with my partner over writing about videogames. Is there a way to speak about games that takes into account its uniqueness as a medium and doesn’t rely on ways of analysing films and books? Previously on this blog I’ve written about Ocarina of Time, and its links with The Arabian Nights and Disney’s Aladdin, but in doing so I was forced to ignore the gameplay of Ocarina of Time, which is by far the dominant way players experience the game. So how can we talk about games as games and not as anything else?

The first two Silent Hill games I see as two major milestones in gaming. Many critics, reviews and fans compare Silent Hill games to films: Jacob’s Ladder and David Lynch films are perhaps the most frequent examples. And they’re not wrong – there are definite links and influences being passed on. But at the same time no film can be seriously compared to Silent Hill (not even the Silent Hill films).

The first reason for this is that the story in the Silent Hill games amounts to little more than a decent premise. Once the premise has been established the games typically move story-wise into an unmemorable Freudian mess. The first game is about Harry, who is happily driving his daughter home when he crashes the car and wakes up to find daughter missing. Go find her, Harry. Now. (Silent Hill 1 has hilariously robotic line delivery in its rare voiced cutscenes. Its direct sequel is only marginally better.) Silent Hill 2 is about James, a man who receives romantic letters from his dead wife inviting him to Silent Hill. Set up your character’s motive for exploring this creepy-as-hell place, and then get moving. So forget about finding any “Oscar-worthy writing” here, as IGN’s infamous review of Grand Theft Auto IV reported. It doesn’t need to be repeated that this statement and many others like it smack of gaming’s inferiority complex and hang-ups about cinema. If you want Oscar-quality, go watch some Oscar-winning films. Games can have good stories, and some of my favourite games wouldn’t work if they didn’t have good storytelling, good writing etc, but by the same token videogames differ dramatically in that they do not rely on narrative.

Second, I believe that the main strength and core of Silent Hill as a series is its environmental realism, and this is something that is untranslatable into cinema. If you want to make comparisons between mediums, then realism is much more of a literary issue than a cinematic one: cinema doesn’t exactly have to work hard to present a realistic world, just turn your camera on and voila. For films, fantasy poses the bigger challenge. However, for games and novels, representing environments realistically is something we would recognise as a challenge. That applies both for graphics and the general layout. What Silent Hill does is virtually unique in videogames – its “levels” are a series of recognisable, realistically portrayed buildings. Hospitals, schools, apartment blocks.

Silent Hill’s levels don’t just use symbolic names like “hospital” as an excuse for a network of seemingly random rooms, the way the vast majority of games do. Yes, technically, Resident Evil 2 is set in a police station, but what sort of police station is filled with ancient Greek statues and landscape pictures of burning buildings? Why is it that once you get a little ways into it the police station starts to resemble the old spooky mansion from Resident Evil 1? By contrast, hospitals in Silent Hill are filled with medical reports. Apartment blocks are organised like real apartment blocks. Streets are like streets. 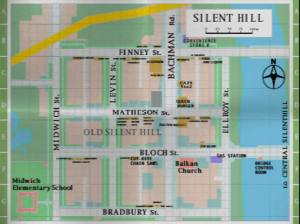 It seems daunting at first, the number of rooms and streets available to be explored. Thankfully it’s never that bad. Most doors inside buildings and on the street are locked, with no way to get inside. Streets are blocked off by inscrutable weird goings-on, like when roads give way to bottomless pits in the first Silent Hill. All the doors are marked on your map when you try them so you know not to try again, and bottomless pits are likewise marked. Also, both games have subtle ways of pushing you forwards, sometimes through obvious clues, other times through an inscrutable method that let’s you “feel” the way forward. I don’t know how to describe it exactly but it’s often masterful the way you’re subtly channeled to a particular location. It may sound unnecessary, and tedious when out of 10 doors in a corridor only one of them actually has something behind it, but the realistic environments create the horror of Silent Hill. 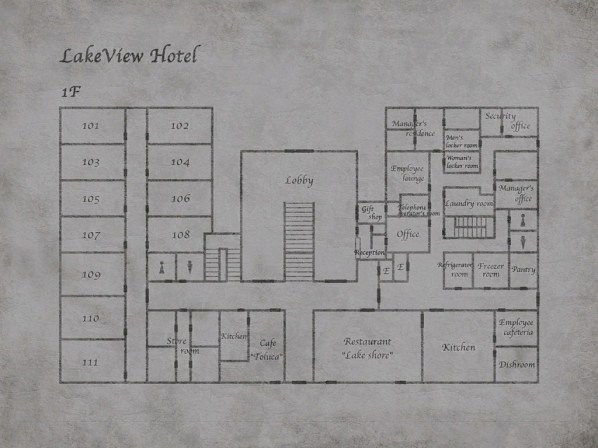 To explain why I have to mention the unique and highly innovative structure of the Silent Hill games. The games start by guiding you through a realistic environment, or level, be that the streets, the school, the hospital, whatever. Then, once you are fully familiar with it (the game uses puzzles to force you to explore), the environment will undergo a radical shift. Creepy turns to scary. The walls will all turn bloody, and metal cages and mesh wire fences are suddenly everywhere – everything is rusty, bloodsoaked, fleshy and generally horrible, much like the finale of the gory film The Descent. There are more menacing creatures after your blood, plus even more clanking and torturous sounds than before. The level has the same proportions, only it’s now become unfamiliar and alien, with new obstacles to prevent you from reaching the location you need to get to. You probe the depths and reach what feels like the heart of the nightmarish world, only for your character to do something dumb like pass out, and before you know it you’re back outside on the streets of the normal world, and everything looks semi-sane again. 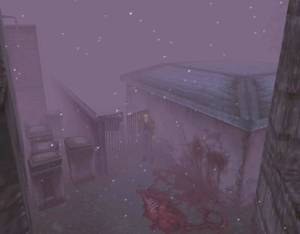 …semi-sane, and of course, extremely foggy.

Why bother with the realistic environments then, since they’re not as scary as the more hellish version? Well, the entire nether-world concept is effective only because it constantly subverts (and perverts) what you know from the “normal” world. The normal world feels safe (even though it isn’t) and the things in it are familiar. The nether-world is neither of these things – it is barely rational, the real world in a state of collapse.

There’s no explanation given in either of these games (nor any subsequent ones as far as I know) for what the nether-world is, nor is it obvious when or where the changes to and from it will occur. The psychological impact of the shift is enormous. The basement, which was scary in the first place, is now terrifying. The game takes the idea of “descent into hell” to an extreme, so that the bottom of a given building is almost always the most dreaded place.

To return to where I started, films can’t do this. There is a technique in cinema, where a director or writer will show an environment simply for the purpose of showing it in its “natural state” if you like, only so that, when the film returns at a later point in the narrative, the viewer will already have an awareness of the location and what is there. It gives the viewer an anchor of sorts, a point of reference. I forget the technical screenwriter-y name for it but watch the first 20 minutes of Back to the Future, the first one, and you’ll get the idea. The first 20 minutes of that film contains nothing but set ups. Jokes are set up, plot points are set up. At the time you’re not aware of it, and the bizarre facts the script throws at you don’t seem meaningful or important but they are absolutely essential because they will become meaningful and important later. But this is still barely comparable to what a videogame, and particularly Silent Hill, does with its unique structure. Cinema can tell or show you information that pays off later, but only videogames can let you experience information. I wish Quantic Dream would pay more attention to what makes videogames unique, for all their pretensions of videogames aspiring to cinema’s standards.

To wrap up, I’ll give a very simple and crude example of Silent Hill’s de-familiarisation. In Silent Hill 1’s hospital, you start by getting the electricity up and running for the lift. Great, all those floors you couldn’t get to are now all available! Except when you get in the lift and navigate to the newly available 2nd and 3rd floors, you find all of the doors are locked, with no obvious way to proceed. “Ah crap,” you assume, “I must have missed something on the first floor where I started”. You call the lift, enter and look at the buttons, only to discover that a button for the 4th floor has now appeared. No creepy noise, no jump scares, no nothing. It’s just there. And it’s so simple, but it works. Every successful moment in Silent Hill plays on that feeling, playing with what you know, or what you think you know, and then changing it up.

There is so much more to say about Silent Hill, from its incredible sound design to the freaky psycho-sexual enemy designs, but these have been covered in-depth elsewhere on the web by people far more qualified. And besides, don’t you think I’ve written enough already? I’m planning a subsequent review of Silent Hills 2 through 4 on the PS2 which may scratch those disgusting itches, or tick those gruesome boxes, depending on your preferred “horror” analogy.