“It’s Ridge Racer!!! Rrrriddggge Racerrrr!” Anyone remember Sony at E3 2006? Those were the good old days, weren’t they? Everyone knows though that ten years before that, 1996, had the best old days, as Street Racer clearly proves. In this game, up to 8 players can take to the streets and race it up in speedy vehicles. ‘Ready for action? Want to play dirty? Can you handle the pace?’, the blurb asks. If you insist: hell yes, yes please and I think so, respectively.

Vivid Image and Ubisoft really went turbo with this game – between 1994 and 1997 Street Racer made its way in chronological order onto (deep breath) Super Nintendo, Genesis/Megadrive, Playstation, Saturn, Gameboy, Amiga and PC. On the Saturn, Street Racer was a PAL/Japan exclusive, sorry America! After looking at some videos it looks like there are some subtle differences between the PS1 and Saturn versions – the Playstation version (which did make it to the US) features sloping courses while the Saturn port has flat tracks, but the Saturn version looks slightly better graphically, with less pop-up. The other versions as far as I can tell were essentially different games altogether – who knows, maybe they even contained streets?! Because the Saturn release doesn’t contain a single street as far as I can tell.

Having never heard of the game prior to buying it, what attracted me wasn’t the tantalising and misleading premise of racing on streets, nor was it – believe it or not – the dodgy innuendo on the blurb. In actuality a tiny screenshot of a race just below the blurb showed an unmistakably Turkish backdrop, dominated by the so-called Blue Mosque. This struck me as a cool detail, and for just a few quid I figured the game was worth a go. And it was worth that, at least. Street Racer is an entirely competent Mario Kart clone that doesn’t do anything too special, but it gets the basics right and packs a lot of content. As well as the normal “behind-the-kart” racing mode, the game also has a “Micro” mode, which transforms the game from a decent Mario Kart clone into an equally decent Micro Machines clone. There’s also an arena battle mode, but, from the little I’ve played of it, the less said the better.

Probably the worst thing about Street Racer in my eyes is the merciless rubber-banding AI which has one opponent stick to you like glue for the whole race. The game guarantees without fail that if you don’t consistently take first place, that one special enemy always will.  Races become dramatic back and forth struggles to grab first place. The championships are tough for that reason, even on easy difficulty. The default number of laps is a whopping 10(!), but with lap times falling under 10 seconds on many courses it’s understandable, and you can change the number of laps in the options which is nice. Each track is assigned to a character, and with 3 tracks per character and 8 characters, there’s a sizeable amount of tracks, usually structured around locales like Beach, Graveyard, etc. Visually, the courses make a fairly diverse bunch but there’s nothing especially memorable about them when it comes to driving – courses are all basic in layout and entirely flat.

As you might expect then there are a variety of ways to club your opponents. Melee attacks hit left and right, and a special forward projectile attack can slow down enemies ahead of you. You can pick up dynamite, which starts a countdown which will eventually blast you unless you can melee attack another racer, which passes it to them. There are also the boosts, which are essential to winning races. While it’s satisfying to pass on bombs, there’s no real equivalent to Mario Kart’s shells which can stop racers dead in their tracks. Melee attacks and projectiles only slow you (or opponents) down for a second, so it can be more of a diversion than a way to actively win races. Solid steering, well-timed boosts, and keeping control of your racer during said boosts, are much more key to winning.

One nice thing is that this game looks and sounds great. The game is really smooth to play and controls well. The sheer range of moves you can do at any one time is almost overwhelming, and it takes some getting used to. The essentials: melee attacks with L and R, a defensive move with L and R at the same time, forward attack with Y, boost with C and hop with Up. 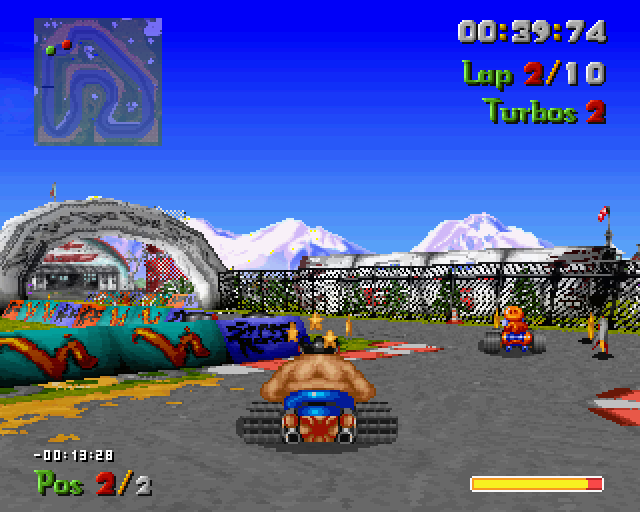 I really like the music for the most part. The best piece undoubtedly is the cheesy rock arrangement of Wagner’s Ride of the Valkyries, which is absolutely hilarious when it shows up.

Street Racer is a good game with a sense of humour but it lacks that special something to push it into the LIFE-CHANGING GO-KART RACER EVERYONE IS WAITING FOR category. For me, I think it comes down to tracks. There’s just not enough variety and nothing especially memorable or exciting (except for the music in some stages). I did however enjoy the bios of the very stereotypical characters listed in the manual so I’ll end this post by reprinting two of them for your dissection.

Age: 4 Centuries and a bit

Comments: A friendly, wise old magician with a devious sense of humour and a few tricks up his sleeves.

Car: Magic cushion with magically attached wheels until he uses his special weapon at which point the wheels disappear and he levitates on his magic carpet.

Comments: This guy is big, bad and aggressive. He carries a baseball bat with which he does all his talking. Biff is as bright and dense as a black hole and never graduated from High School.

Car: Biff drives what he believes to be the ultimate status symbol, a blue, souped by 4wd buggy, with everything double chromed so he can keep an eye on his reflection.

Well, that about wraps up Street Racer and this post- whoa. Hang on a sec. 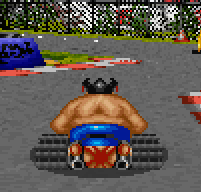 This is just wrong. Wasn’t this guy in Cho Aniki? 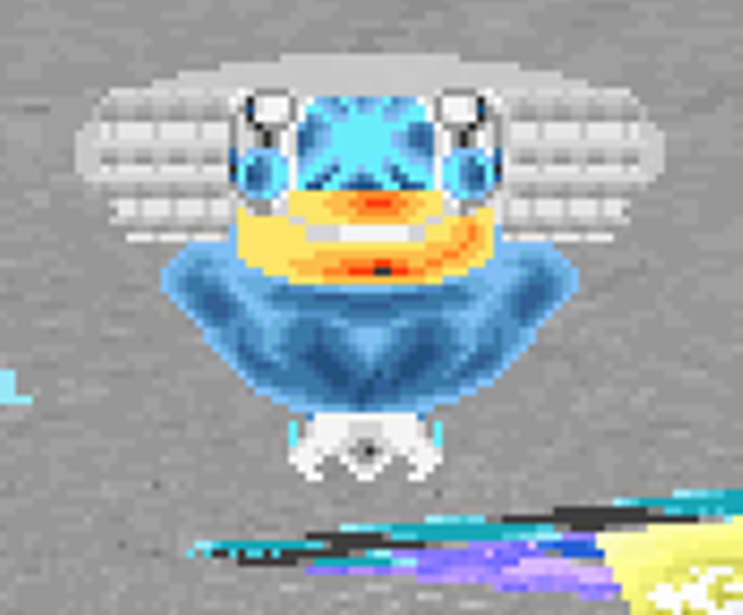 And with that, I take back every positive word in this post. Every word. That’s quite enough of Street Racer.  You do not want this abomination in your home.