Now, I only have limited access to a Wii, but when I found this game going for £2 at a local shop I could hardly say no. The original NiGHTS Into Dreams, which I have a few brief posts about is one of my favourite games, dare I say, ever. I was of course aware that its 2007 sequel, Journey of Dreams, got a fairly muted reception upon its release, garnering fairly average reviews and I imagine less-than-fairly-high sales. But, thankfully, from the little I’ve played, Journey of Dreams does at least retain the exact same gameplay of the original, with the expected modern visual effects and clarity. I haven’t played enough yet to talk much about the game as a whole, but I felt compelled to post because the opening to this game is revealing of a number of issues from the word “go”.

These aren’t definitive impressions, but booting up the game only to go through a lengthy tutorial on controlling NiGHTS delivered by a talking owl named “Owl” is enough to tell me there’s something wrong here. I also haven’t played any of the children stages – which is probably a good thing if I want to keep my memory of the original game unsoiled.

NiGHTS talks in this game. To me, this was a disappointment, but thankfully it isn’t as badly handled as it might’ve been. NiGHTS is voiced by a woman, with what sounds like an Aussie-South-African hybrid accent. Strange choice perhaps – but the very moment I realised NiGHTS was about to talk, the horrifying visions of Haley Joel Osment in the Sega-hired recording booth started. Maybe Haley’ll show up later, who knows.

The children (or at least Will) are almost as creepy as Haley in the picture above; their eyes almost glow… again, the voice acting is okay. Not the worst, but you’d prefer they were silent, the way children should always be.

A few other interesting elements about Journey of Dreams that are worth putting out there in miniature form: the music is lovely – it’s by the same composers who did the music for the original game. The game also looks great for the most part. Many of the sound effects are reprised from the original Nights, which feels strange at times. The control isn’t as sensitive as the original game, making NiGHTS easier to control in some ways, but to me the lack of direct control makes it less satisfying. There’s also more time allowed to you before the combo (or link) fades, so I was able to rack up 200 links on the second stage of the game with hardly any trouble.

All told, the gameplay is very solid and it seems like a worthy sequel in that regard. What bothers me is the heavy presence of the story. This criticism comes partly because I’ve also been playing the original Sonic Adventure on Dreamcast, so you might call this a veritable Sonic Team binge, and the way their games use cutscenes to tell the story is aggravating at times. Journey of Dreams isn’t as extreme as the Sonic Adventure games (at least not the first two I’ve tried), many of the cutscenes are fairly short and there is conventional text dialogue for some of the parts which keeps it shy of interminably long. Having said that, you only have to go back to the original 2D Sonic games and the original Nights into Dreams to see that Sonic Team haven’t always handled story in this way.

Having the story elements front and centre in my opinion, in these franchises, diminishes what these games do. For one, having an owl explain to me that I should fly through the floating rings in front of me is rather patronising. Anyone who has ever played a videogame before knows that when floating rings are involved the player’s aim is to be the best damn dolphin they can be. I’ll be the first to admit that Nights, especially the original – from what I can tell they toned down some of the obscurity in the sequel – is obtuse to start with. I spent some time with the manual with the original game because I was confused, and I still didn’t get it. “Ideya Palace”, “Ideya Capture”, “Blue Chips”, “Dualize”…? It’s not easy to decipher, and all of this is mandatory, let alone understanding the optional stuff – “Trick Ribbons”, the “Link” system, and so on. I can see how a tutorial would be potentially very useful here.

At the same time, there’s something to be said about Nights as a kind of sandbox experience in which experimenting and discovering things without necessarily knowing what will happen beforehand is encouraged. After all, the A-Life system in the game is entirely optional, but if you have a grudge with the Nightopians, you could easily discover by accident that the music will change!

Its all about blue balls in NiGHTS – and an occasional set of purple ones for variety.

What’s striking about the older games from Sonic Team is how pretty much the entire story occurs “off-screen”. When Sonic moves from one stage to the next, the player isn’t treated to a cutscene explaining why it was necessary for Sonic to go to the Casino Zone, or the Oil Zone, or wherever. He’s just there, and we infer (or, perhaps, as children, we imagine) what happened. And, as was the case for a great many console games back in the day, if you wanted to know what was going on, you had to read the story in the manual. Even in the first Nights game, you’re treated to an opening cutscene (optional of course) which sets up the plot. Once you’ve moved beyond the title screen however, there’s no more story intrusions until the final level, which incorporate plot elements in the level itself and afterwards with a final joyful cutscene to wrap things up.

There’s a certain minimalism to that set up which focuses the player entirely on gameplay. I described the use of cutscenes in games like Tomb Raider recently on the podcast as serving as book-ends, or another way of putting it would be to say the wrapping on the present. The story holds it together, and contains the experience. But in terms of what you will be experiencing, well, here you are and its gameplay. Gameplay is right at the core of Nights and Sonic, in my opinion. When I’m playing the game, that’s what I’m after and its what keeps me coming back. 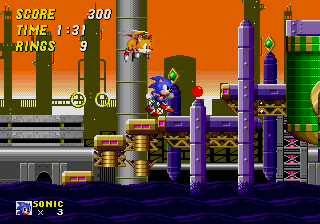 How exactly did Sonic and Tails get to the Middle East anyway?

So what am I saying? Less is more. The reason the original Nights is so powerful is because it left so much to the imagination. And that’s precisely the issue with the sequel, and more recent Sonic games, where very little is left to the imagination. Was it really worth the Team’s effort, writing sub-fan fiction quality dialogue between Sonic the f’ing hedgehog and the American president, in order to justify Sonic and co’s exploits? Why do we need to be made of aware of Tail’s hacking skills to get to the game? Why does Sonic have to reassure the president? This is exposition on a gargantuan scale! I challenge any normal person not to feel dirty after watching this.