This post came out of United We Game’s What is a Game community writing challenge. I was already plotting a written piece of some sort on Shadow of the Templars, but wasn’t sure what my “angle” would be, so thanks to them. Really, thanks, because I’m not the only one with positive things to say about Broken Sword recently!

Videogames and books. Not the best of bedfellows, some might say. In the case of 1996’s Broken Sword: Shadow of the Templars (aka Circle of Blood) though, there’s more than a little speculation online that Dan Brown took inspiration from its themes, setting, characters, plot – just about everything and anything – when he wrote The Da Vinci Code, published in 2003. Certainly it shares with Broken Sword a preoccupation with the myth (conspiracy?) of the Knights Templar. Now, I’m not really interested here in making direct comparisons between Broken Sword and Dan Brown’s novel. Instead I want to talk about what distinguishes these two mediums, novels and videogames. There are a lot of great features in Broken Sword – a strong story, believable characters and sharp, funny dialogue – but gameplay, it seems to me, is less essential to the mix. So my question is: would Broken Sword work just as well, if not better, as a novel? Could it have had the success of The Da Vinci Code, before The Da Vinci Code? What would be lost from the game if you took out all that pointing and the clicking?

Honestly, probably not as much as you might think. As an adventure game fan, I’m only too used to the absurdist logic that plagues this genre. Imagine my pleasant surprise re-playing Shadow of the Templars for the first time since the late nineties. The surprise came of course during those moments where the usual adventure-logic doesn’t come up. There are plenty of cases where it does appear, of course, but in many ways the game is more interesting and surprising when you aren’t being overwhelmed with puzzles and the game simply lets you sit back and watch the storyline unfold before your eyes. The question remains: was I playing just for the story, or was I also being drawn in by Broken Sword’s interactivity? 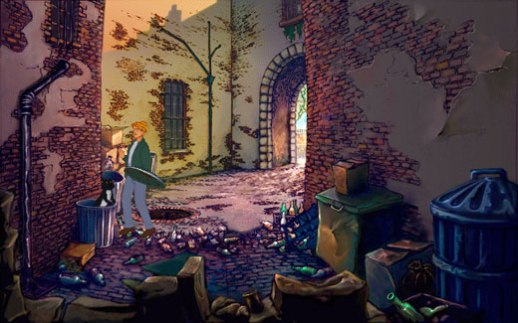 The moments where the game takes over are undeniably a joy to watch. Shadow of the Templars is riddled with dialogue, much of it very funny. And even by point and click standards there is a surprising number of advances made with dialogue alone. One of the most memorable instances occurs in Lochmarne, Ireland, while gathering intelligence from patrons of the local pub. One man stands out as being particularly nervous and unreceptive to George’s questions. At this stage, I was expecting to have to engage in the usual point and click trickery. The target, I’d been informed, couldn’t handle more than single pint of the pub’s virtually undrinkable ale due to a nervous disposition. Was I supposed to distract him and spike his drink with one of the assorted items in my inventory? Or was there some way of forcing him to drink more than intended? Perhaps the solution was to make him shake my hand with an electric buzzer in it, to set off this guy’s nerves?

The solution turned out to be rather more pedestrian. After quizzing the 14 year old kid masquerading as a 26 year old hanging around outside the pub, it becomes increasingly apparent that aforementioned nervous pubgoer is outright lying to you. Then you simply lay out all of the facts to said pubgoer, interrogating and questioning his every word. It spooks him and he dashes out of the pub, but not before divulging some key info. It’s a dramatic confrontation and an effective setpiece. All of this – the investigation, the interrogation – would work just fine in a graphic novel. 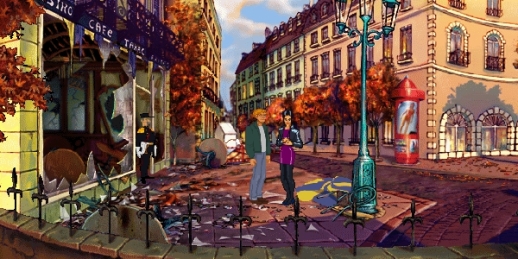 By contrast, the worst, and most gamey part of the game is undoubtedly a brief stint Syria. It has its moments, but there’s a relatively greater reliance on arbitrary puzzles and a lack of compelling character interaction. Your goal in this area is to raise $50 (which George apparently doesn’t have, something I simply don’t believe – he paid for the flight to Syria didn’t he?), and in order to do so you need to gain access to a toilet by retrieving a missing toilet brush. Come on. Still, that doesn’t mean I think Broken Sword should’ve been a novel rather than a videogame. Why, you ask…?

There are several interactive parts which work in Broken Sword’s favour. Unlike The Da Vinci Code, I was highly invested in the characters. That I think you can chalk up to the intimacy afforded by interactivity between the player and the main character. Unlike the LucasArts’ adventures, George can – and will – sometimes die. Sometimes you can see it coming, other times it’s harder to anticipate. Either way, it can be genuinely painful when it happens. Heroes in novels aren’t supposed to die. There are some especially effective moments in Sword of the Templars when the game clearly warns you not to do something, and you fail to heed that warning despite getting the message. I got it alright, I just chose to ignore it. I didn’t think the consequences would be so serious…nooooo! Cue cutscene of George being thrown off a bridge in a bodybag. So death matters, in short. Of course you just reload the last save, but psychologically, death matters insofar as I’m emotionally invested in avoiding it. 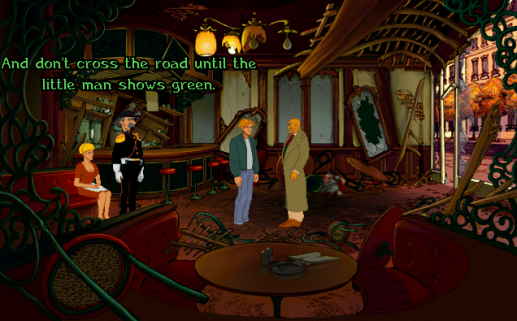 There’s also occasional dialogue which directly comments on some incidental thing you did, probably without even being conscious of it as a choice. On more than one occasion, after I’d left a location, George or another character would comment about my having left the tap running! Apparently that Irish pub I was in flooded thanks to my (the player) being in a rush, as opposed to George (the character) being in a rush. It wasn’t necessary for the plot or a puzzle for me to leave the tap running, it just happened to turn out that way because I was in a rush! It’s those small touches that create the sense that you are George, and that you’re doing more than moving along a fixed track from cutscene to cutscene with some puzzles to stall you inbetween (although that summarises the point and click genre for the most part).

Those two things then – incidental dialogue and death – that really help when it comes to identifying with the main characters. That’s at least one marked difference from The Da Vinci Code, where I didn’t care about the characters in the slightest – and I quite liked that book. Beyond their thematic similarities, I think the best feature Broken Sword and the Da Vinci Code have in common is excellent pacing. Thanks to puzzles that are just the right difficulty with very few exceptions, I was rarely stuck. While this game certainly leans heavily on features like plot and characters that would work equally well in a novel or film, I’m grateful it’s a game. The puzzles, the peril, the interactivity… it may be a stripped down experience compared with other, more puzzle intensive games, but Broken Sword deserves a good deal of praise for the way it integrates gameplay into the story. It’s infinitely smoother than the majority of adventure games of its day.