This is a series of posts dedicated to independent and interesting videogame shops in the UK with a focus on those that sell retro/import games, both those that have perished and those that still survive today. We could always do with tip-offs of new or old places to cover, and would love to get memories or perspectives of the shops featured, so please take the time to comment. With the rise of the internet, dedicated retro videogame retailers are becoming scarcer and harder to find. This series will cover London for the most part since that’s where I’m based but I’m interested in other parts of the UK as well. This is the fourth post (check out the previous posts on The Video Gallery in Islington, Crazy Thumbs in Tooting and Entertainment World in Birmingham) and this time around we’re looking at Awesome Games in Walthamstow, London. 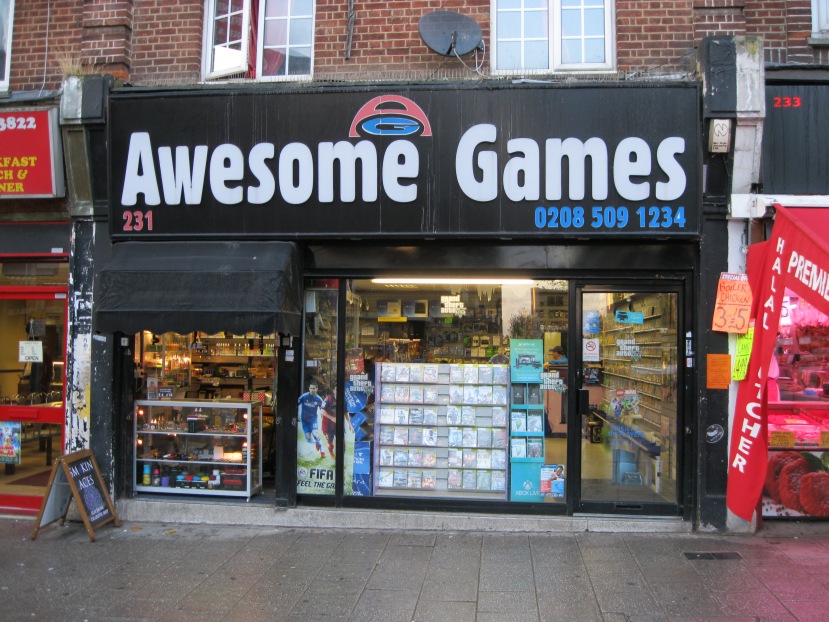 It’s taken a while to get to Awesome Games, but we’re finally here. This shop is one of the main reasons I started this series of blog posts. Awesome Games has been around for years, but their retro section is a relatively recent addition. It was by pure chance that I saw this shop on Walthamstow’s High Street and walked in. My surprise at finding Saturn, PS1, Dreamcast and Megadrive games on the shelves in an unexpected location made me want to write blog posts about this rare breed of shop. Awesome Games wasn’t my first retro videogame retail experience – predictably enough I’d visited Streatham’s Retro Game Base. But because that visit was planned, it didn’t have the same surprise factor.

Usually in one of these posts I’d start by talking about the stock, the layout of the shop, the prices… we’ll get to all that, but first I have to admit that the reason I enjoy going to Awesome Games so much is because of the shop’s owner, AK. I was pleased to find when googling Awesome Games that every single review of the shop online contains some variation on the phrase “the owner is lovely”. And it’s true, AK is a genuinely lovely guy, always up for a chat and happy to offer cups of tea to customers. The atmosphere in the shop is utterly welcoming: last time I was there, AK asked a regular customer to help a new customer scan the shelves for a specific game. And the regular customer helped, and was happy to do it! That’s awesome. This is a life-enriching shop and only good things will happen to you here. So avoid Awesome Games at your peril. (Disclaimer: If I seem overly enthusiastic here it’s because this is London where friendliness and politeness are notoriously lacking.)

One of the best things about chatting with AK, and I realise this sounds strange, is his disenchantment with games, something he’s not shy about letting people know about. Here is a guy who is extremely knowledgeable about new and old releases (over twenty years in the business will do that), but who also recognises the pointlessness of that knowledge… AK is a valuable reminder for a videogame blogger like myself who doesn’t have parents shouting in my ear telling me to get some sunlight, that there are more important things in life than videogames. Hobby = good, obsession = bad. 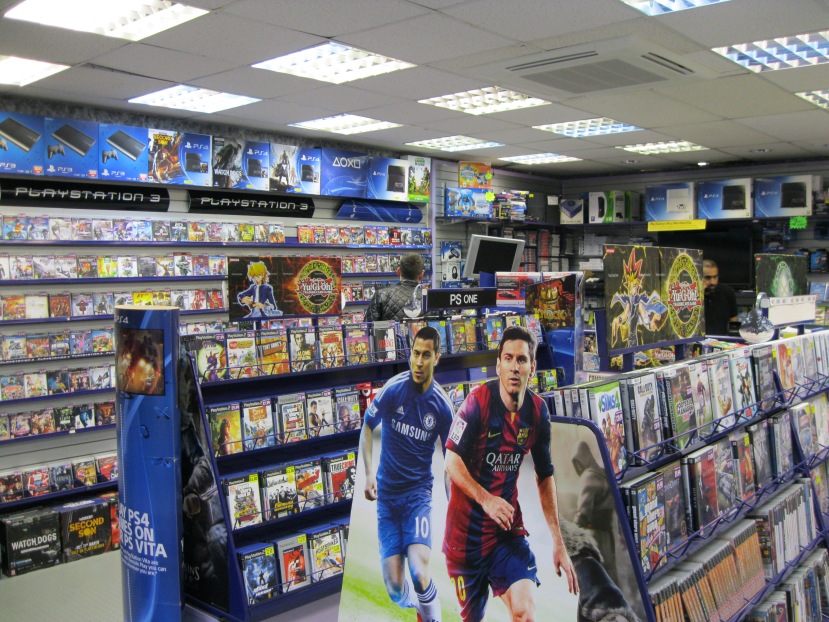 You’re probably sick of my moralising and would rather hear about the contents of Awesome Games. What are we looking at here, games-wise? Well, perhaps a third of the shop is dedicated to current releases on the new systems. The rest is a mixture of retro stuff, predominantly PAL and for popular consoles: Playstation 1 and 2, Wii, Gamecube, PSP, GBA, DS, Dreamcast and Megadrive are the best represented with stock out on the shelves. In cabinets you’ll see original Gameboy and N64 games, some NES carts (gold cartridge Zelda II, which looks great), some SNES stuff (some boxed copies of Secret of Mana), plus a few Saturn games – I spotted Resident Evil for the Saturn last time I visited, a rare sight indeed! 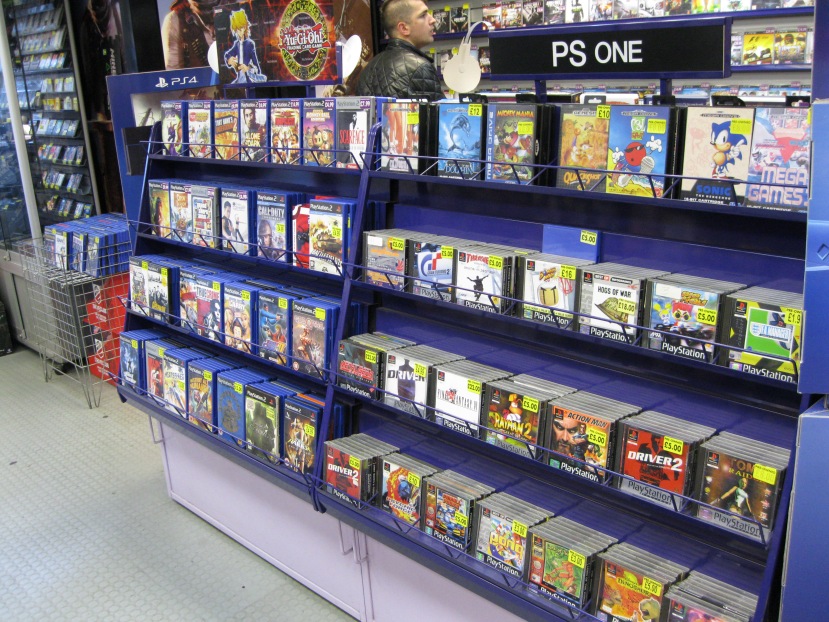 The shop is not the most elegant or spacious – there’s nothing really good or bad to say about it. It doesn’t have the stylish feel that you get at Crazy Thumbs, but by the same token we’re not talking about a grubby basement feel either. It’s a happy medium. The photos give a fair indication of the amount of stock on offer, I’d say it’s on par with the dedicated game shops in South London like Retro Game Base and Crazy Thumbs.

Prices are quite varied and it’s a good shop to visit for that reason. In my many visits I’ve not left empty handed even once. Some individual items are priced quite high but I’ve come across some genuine bargains here too: Oddworld: Abe’s Oddysee and Exhumed on PS1 for £5 a piece are two prime examples of games that sell for more online. Also, as usual with these shops, buying multiple games can lead to a discount that adds even more value. 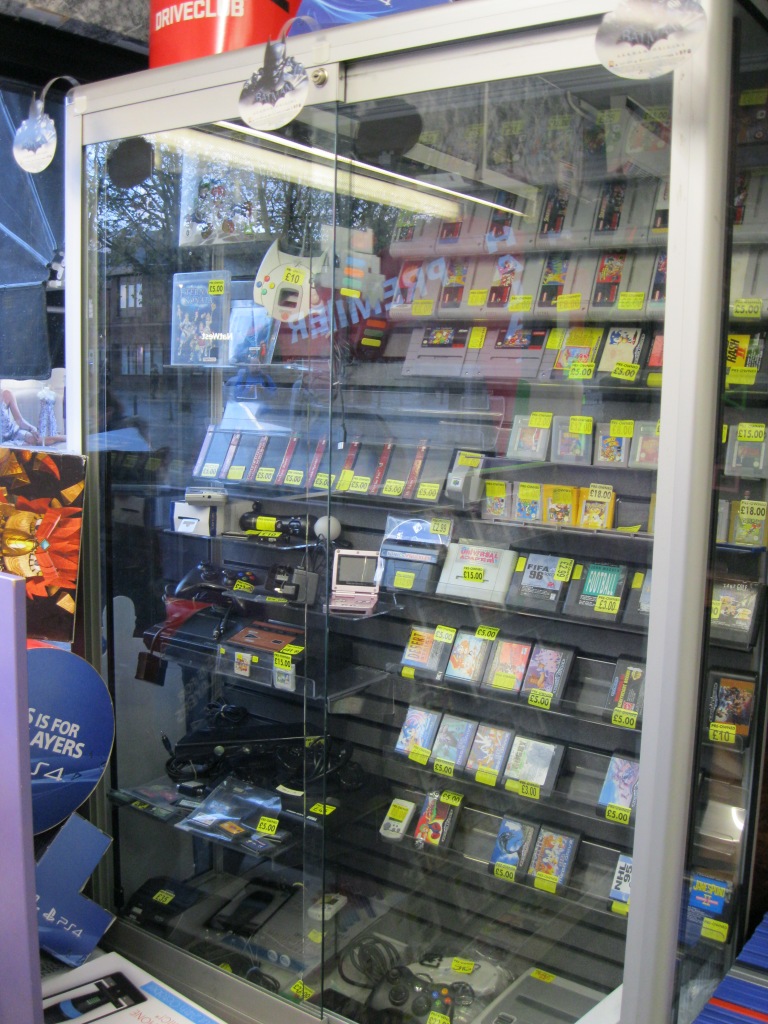 All in all, Awesome Games is well worth a visit. North London is a barren wasteland when it comes to retro videogame retail, and Awesome Games makes for a very pleasant oasis. I’m not aware of a single shop north of the river that can compete, since all other independent game shops I’ve seen on the retro front are either hideously expensive, have very little stock, or both. If you are aware of any competition that I don’t know about, do drop a comment below here and I’ll check it out.

My next post in this series will look at Game Smart in Yardley, Birmingham. Till then there are a few more photos of Awesome Games below. See those and then do pop over to Walthamstow if you can, you won’t regret it. And if I can’t convince you, maybe the TV will. This shop is famous! Well, not really. But it did appear in Peep Show.