Sonic the Hedgehog 2 on Megadrive/Genesis was a childhood staple of mine. I played it every which way, learning the levels and special stages, even though I never owned the game personally till the Gamecube era courtesy of Sonic Mega Collection. I don’t have that kind of hyper-nostalgia for Sonic as I do for a game like Goldeneye on N64, say, and I am well aware of Sonic 2’s flaws. But on a recent gaming podcast I heard someone describe their first experience with Sonic 2 as an adult, and their picking apart the game’s issues bordered on painful listening. It was so incredibly different to my own time with Sonic – a long, long time, made up of lots of short bursts spread over years of my life, my entire childhood…!

I wish I had grown up with Burning Rangers in the same way. Or if that’s too much to ask, just chatting with someone who had had that experience would be really fascinating. For me, coming to this game now, it just doesn’t fit into with my wham-bam-thank-you-ma’am gaming style of late (see the GGTOW manifesto for more deets). 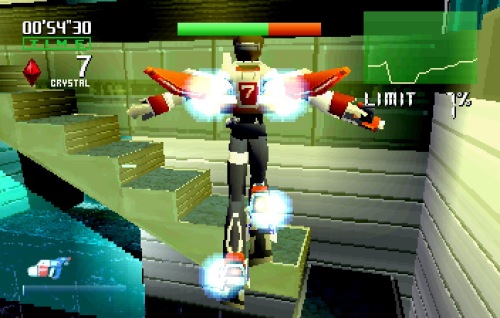 It’s now been several months since I imported my Japanese copy of Burning Rangers on the Saturn, and finally, only now, do I have sufficient distance from the game that I feel able to talk about it here. It’s a game that I was very much anticipating (see my gaming wishlist circa 2014), but when it came to actual, alive and breathing Ranger-ing, I didn’t have a clue what to make of it.

Like Sonic Team’s previous game, NiGHTS into Dreams, Burning Rangers has a striking, novel concept. In this 3D action game/platformer, you run around as one of two anime-inspired characters putting out fires with your water gun, collecting gems, and saving people with said gems. The gameplay is pretty fun, but it never reaches the giddy heights of something like NiGHTS. Instead it ends up feeling a bit like Sonic Team experimenting with three dimensional platforming, gaining some new skills and experience for Sonic Adventure. From what I’ve read, your teammates in the game who direct you during levels provide much of the game’s character and charm… elements that are lost on me in the Japanese version unfortunately.

Thankfully, there’s always the music. There’s much comfort to be found in Burning Rangers’ sound department. And clearly Sega were aware of this, since the Japanese version of the game comes with a mini audio disc. Not a Sony minidisc, but a mini audio CD, kind of like a Gamecube disc. This CD has three vocal tracks from the game’s soundtrack. As you might expect from this point in Sonic Team’s history, it’s a joy to listen to.

I’ve had these tracks pumping out of the stereo in my kitchen these past few weeks, and I simply love it. The high energy tracks like We Are Burning Rangers are great, but my favourite track is the mellow and romantic song “I Just Smile”, the song that closes this triple whammy of Sega blue skies. Sung by Tomoko Sasaki in the Japanese version, “I Just Smile” is a beautiful song.

Sasaki, as it turns out, is one talented woman: she was one of two lead composers on NiGHTS and Burning Rangers, and she’s worked on many other notable Sega games over her career including Samba de Amigo and Space Channel 5 Part 2. But undoubtedly her career high is her memorable appearance in Sonic Team’s jingle at the start of NiGHTS!