The original Time Crisis changed everything. There’s no doubt that the ducking mechanic evolved the lightgun genre considerably. Imagine if the ducks in Duck Hunt had guns, that they shot at you as the flew, soaring into the sky. And imagine if, like in Punch Out!, you were able to dodge incoming shots. Well that’s the leap that Time Crisis made. Lightgun games were no longer simple shooting galleries, instead they incorporated other action game elements without losing aiming and shooting as the heart of the genre.

It’s been a while since I posted a new addition to the lightgun adventures series, and the main reason is that I completely inundated myself with lightgun games these past few months to the point of overwhelming myself. Between this post and Burning Rangers, I’m all about clearing out the backlog of games I want to write about on the blog. Please understand: this is a desperate hunt for the definitive lightgun experience, and I’ve played 10 lightgun games on PS2 so far to that sole end. So it’s practically inevitable at this point that any piece of writing I do on this topic will be the kind of detail-heavy post that only someone who’s played 10 G-Con compatible games on PS2 in the span a few months would write. Let me apologise right now for this post’s utter inaccessibility!

In my hunt for the definitive lightgun game, I didn’t find one, but I do honestly believe that between Time Crisis 2, 3 and Crisis Zone, Namco put together a definitive lightgun trio. All three games have brilliantly executed gameplay, but they all have at least one flaw that the other games don’t have, so they perfectly balance one another out. Back when I wrote about Time Crisis 2 on PS2 I spit a lot of positivity at it, but there’s no question that compared to its console brethren it’s light on content.

There are no 40 hour opus lightgun games to my knowledge, for obvious reasons, but the 2003 console port of Time Crisis 3 has a chunkier arcade mode, plus a longer and more difficult alternative campaign played from another character’s perspective, in addition to the returning challenge mode which lives up to the “challenge” moniker. There are also unlockable game-breaking features which can only be gotten through repeated plays of the campaigns. 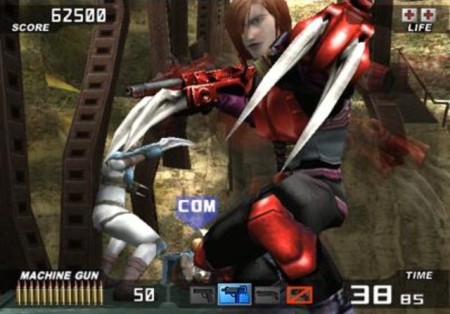 Besides a beefier package, the main change between Time Crisis 2 and these two later games is the expanded weapon arsenal. Crisis Zone even completely ditches the tradition of having the pistol as standard, instead giving the machine gun the limelight. Time Crisis 3 though is the most strategic of the bunch, letting you choose on-the-fly between the standard pistol and an ammo-restricted machine gun, shotgun and grenade launcher. You gain ammo for the non-standard weapons by shooting enemies dressed in yellow (it sounds really crap to be an NPC in a Time Crisis game), plus you can level up your non-standard weapons through repeated use.

The sole downside to Time Crisis 3, and thus the sole factor that stops it being the definitive lightgun experience for PS2 in my mind, is the lack of a “Double Gun”, or 2-player co-op mode. There is a 2 player mode, but it’s splitscreen, and worse it’s the same horrible splitscreen from Time Crisis 2, where each player is aiming and shooting in a screen that only fills a quarter of the television screen. Why…? I don’t mind its existence necessarily, I just want the option for two players to share a single screen. Presumably – since a single screen two player mode is in both TC2 and Crisis Zone – it was the weapon system that prevented them from including the mode in TC3. Inexcusable.

That’s why I’m taking justice into my own hands. Time Crisis 3, this bullet’s got your name on it!

And so we come to 2004’s Crisis Zone, which despite its later release is actually a beefed up port of a 1999 arcade game. While virtually identical to Time Crisis in many respects, Crisis Zone adds a welcome new wrinkle to the well-established Crisis formula: the bullet warning system. This system gives you extra flexibility when dealing with those pesky gun-toting ducks- sorry, terrorists. Typically in the mainline Time Crisis games, a deadly bullet is indicated by a red mark on the relevant enemy. At that point, you have no choice other than to duck and hide, fast, before you get hit. (The comparison with Quick Time Events in games like Resident Evil 4 is fair, if a bit harsh.) In Crisis Zone you have a form of Spidey Sense that means a flash is in fact a warning rather than a shot itself. Hence after the flash the game provides a short window of time to shoot the threatening enemy before they pull the trigger for reals! No more ducking and hiding – although you can and will do that. It’s a small wrinkle that makes you feel particularly badass when you successfully stop an attack.

Crisis Zone differs from the main Time Crisis series in that it is set in London, as opposed to some fictional Eastern European states. Not that you would know, it’s the most generic looking setting imaginable coupled with the least believable English weather for the least believable plot ever conceived. Congratulations Namco!

And there’s not really much more to say about Crisis Zone. The main game is not quite as good as the main Time Crisis games – it’s very, very similar but just a bit quieter, with fewer setpieces and some unmemorable corridor shooting bits. But it is still a quality campaign, with fun destructible environments and a fully functioning single screen two player/double gun mode (are you listening, TC3…?!). There’s also plenty of unlockables – a second, harder campaign, and then alternate versions of campaigns, making for a total of four, plus the usual challenge/training modes.

Really, it’s splitting hairs trying to pick my favourite of the three Crisis games. Namco and Sega are the greats of the lightgun genre, and their best efforts demonstrate a beautiful balance between accessibility and complexity. Time Crisis 3 and Crisis Zone are immediate experiences, full of impact and “wow” moments the first time through, but spend a while in their company – try their challenge modes! – and you start to see their depth.