There are touches of greatness to Rabbids Go Home. Amongst them is the game’s memorable use of licensed music, a rarity in this kind of game. The Delfonics, in a 3D platformer? You bet.

(OK, not this song. Actually it’s I Told You So.) Delfonics and a few other fantastic touches aside, Rabbids Go Home is let down by the repetitive nature of its main gameplay. The game basically consists of controlling a shopping trolley, racing through levels with your two Rabbids, stealing junk from humans in an almost Katamari like fashion. The goal is to pick up enough junk to help the Rabbids build their way to the moon. It’s a fun, wacky premise, and the game delivers on that absurdity. Ultimately what you end up with is a perfectly decent alternative to the Mario Galaxy games, in an era when there are very few alternatives to Super Mario Galaxy. But I don’t really want to talk overly much about the game itself here: this post is about post-game content, i.e. what happens when you beat the main game of Rabbids Go Home. 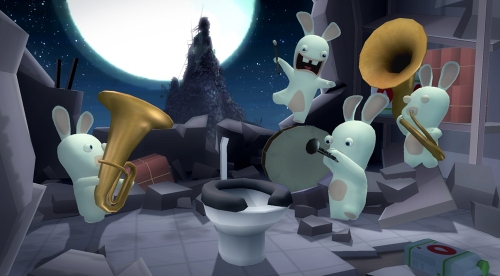 Meet the Rabbids’ official band, who will serenade you after each level and transport all the junk you collect through the sewers to your base. Hence the toilet.

Like the Mario Galaxy games, Rabbids Go Home has a relatively low bar if you just want to see the end credits. Low enough that when I unlocked the game’s final stage, I still had a few stages available which I hadn’t played. After the credits rolled, it was little surprise when the game unveiled a new challenge: 31, 750ft. By contrast, unlocking the final level only required 23, 000ft. When I did the maths it became apparent that the game was demanding I collect every single collectible in the game, 100%. That amounted to a considerable challenge, even though I had 100%ed certain individual levels already along the way.

And so that was set to be the end of it for me. These days I’m in the habit of turning off a game after the main game is over, unless there’s some especially compelling post-game content. A recent example of a game that I deliberately backed away from was Jet Set Radio Future. Great game, with excellent content throughout, but the post-game events proved very challenging and time-consuming. I made a conscious decision to move on, content in the knowledge that there were some parts of the game I hadn’t experienced.

I was fully prepared to do the same with Rabbids Go Home. The game’s ending hints at the possibility of a level set on the moon, which sounds pretty damn cool, but with a big effort required to get there I figured it best to ignore the lure of whatever bonus material 100%ing the game would net you. Better to settle for merely seeing the credits, right? Right. 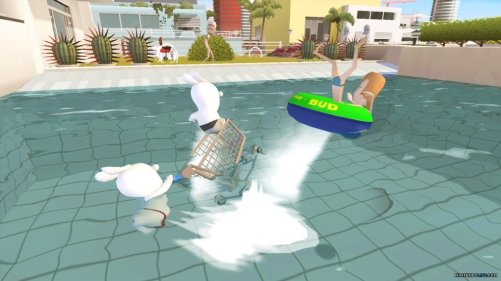 For curiosity’s sake – always with that damn curiosity! – I decided to look and see what the reward was for hitting that fabled 31, 750 ft goal. Maybe I could see a video online of the moon level or whatever. But what I learned dramatically damaged my estimation of this game. Because, wouldn’t you know it: there is no reward. None whatsoever. Oh no, wait, actually, the star icon next to the 31, 750 figure on the level select screen rotates. Seriously, what the fuck?! Nothing?! Not even an alternative title screen or cheap gimmick. They couldn’t even be bothered with that.

Does the fact that my opinion of Rabbids Go Home has soured as a result make me a complete hypocrite? Why do I care if there’s no reward for a task, when I wasn’t seriously considering taking on that kind of challenge anyway? Maybe it’s because I feel a strong sense of pity for the people who did take it on, because, for a few minutes anyway, I did consider an attempt. As I said, the game hints at some substantial post-game content, a moon level is implied! I believed it and a quick Google search revealed that other people expected something similar. God knows how many people out there actually went and completed the game fully, believing (like me) there would be something to unlock, only to be let down. Maybe they didn’t check online, or maybe it was in the early days after the game had just come out so the information wasn’t out there.

Either way, it’s shit. As gamers, we’re conditioned to expect at least something in the way of post-game content. Or, if there isn’t any, to at least have the game be clear that there isn’t any. So how about those dangly carrots? Have you ever been tempted by prospective unlockables in a game only to be let down? Or the oppposite: what is the best, least expected unlockable you’ve come across in a game? One thing I know now: not even The Delfonics can redeem Rabbids Go Home for me.