Braid is not a fun game. And that’s the point. Or so indie games designer Jonathan Blow says. Convenient, you might think, but I suspect Jonathan actually means what he says. He’s one of those intellectual types who quotes James Joyce and Thomas Pynchon whilst denouncing the use of phrases such as ludonarrative dissonance. In Braid, Jonathan tried to make a game that was familiar and nostalgic, but also made you think about games as a form – it is a self-concious game, the thinking man’s Mario if you will. So how successful is Jonathan in realising his vision? Is Jonathan a pretentious genius or just plain pretentious?

Beautiful artwork. Pretty sure the artists didn’t get paid #thatindielife

There are six worlds in Braid, each with its own set of physics laws. At the start of each world you can read short passages which make up a strange story about a man called Tim and a girl he is in love with, a princess. Instead of making coins being a plumber, Tim has gone to university – probably studying English and Philosophy – and, judging by his patched suit, is likely earning a lot less than Mario. It’s a mysterious tale which mirrors the gameplay mechanics – for instance, the first world is about reversing time, which matches Tim’s desire to change the past. In short, we explore his emotions through play.

Braid captures the essence of the 2D platformer and then explores a moral dimension that is “missing” in Mario. If Mario sat down to discuss his life’s regrets, this game would offer an image of his inner psychic world. And according to Braid there is something sad and cruel about the inner life of a 2D platforming avatar. You’re forced to kill innocent creatures (including cute bunnies) to get ahead. You’re trying to save a princess – but what if she doesn’t want to be saved? What if it’s your ego, not justice, that motivates your actions? 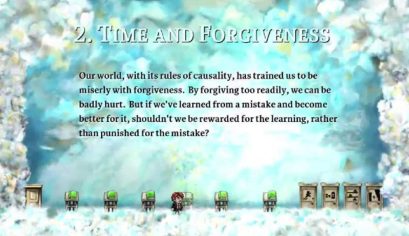 A lot of people really enjoy this ethical chitter chatter, with many people discussing the meaning behind The Princess (is she a symbol for the atomic bomb? Or a social justice warrior in disguise?), the morality of killing Goombas, and whether any of it is real or a dream or the psychic state of someone having a breakdown after a relationship. There are deep puzzles in Braid – both philosphical and mechanical – that make us think about how videogames are different to other mediums.

But, as I said, Braid isn’t fun. And when a game isn’t fun, that’s a problem, right? Jonathan’s philosophy sounds similar to writers and artists in the modernist movement in the early 20th century who argued that true art is difficult – and, to an extent, shouldn’t be (obviously) enjoyable. Here is Jonathan talking about difficulty and accessibility in games:

Gravity’s Rainbow isn’t holding your hand the whole way through to make sure you understood every paragraph. It’s exploring things it thinks are interesting, and if you can keep up, great. If you can’t, you can come back to it in a few years and see it from a different perspective. Games don’t seem to have that at all – and that’s part of what makes art deep and interesting. That’s what really interests me.

I’ve never agreed with this opinion, whether it be with art, books or videogames. I believe games can be both enjoyable AND deep and meaningful. I’m wary of positing a binary where good = THINKY and bad = FUN. Modernist works are frequently regarded as elitist and I would hate for videogames to be seen in the same way. I don’t think games need “highbrow” and “lowbrow” distinctions. What’s great about videogames is that they’ve managed to stay away from those binaries for so long – silliness and depth co-exist in weird harmony in most games, and that’s not something I ever want to go away.

(Here is a video of Jonathan where he says many things – including that he doesn’t play Japanese games anymore. He lists some reason or other, but it’s probably because he’s a bit silly himself, deep deep down.)

In a sense, I want game developers to stay out of the “are games art” debate – and just focus on pushing the boundaries of what games can do, without forcing a paticular artistic mode or a didactic ART FOR ART’S SAKE agenda. And though I agree with him that games developers need to become more aware of how videogames work differently to films and books, there are already examples of this historically, notably my favourite game of all time, Shadow of Memories. But maybe I’m just butthurt – I don’t like it when people make big generalisations about Japanese games

Although the cynic in me considers Jonathan’s self-awareness an anathema to true creativity, I’ve been weirdly addicted to reading interviews with him. There is something very cool about a guy who can explain why he did what he did in lurid, flowery prose. Differing opinions aside, I have a lot of respect for Jonathan as a game designer, but especially as an indie developer. Not only are some of his ideas in sync with my own (a very attractive quality in a man), but it’s awesome that his recent game The Witness (PS4) was a self-funded project which took seven years to complete. This, if nothing else, shows a passion for discovering what games are truly capable of. I wonder if it’s any fun…