Lack of free time much? Lately, absolutely. But thankfully I have had just enough free space to get in some time with Alundra. Now, I did write a review of Alundra waaay back in 2014 based on my own memories of the game, but at this point it’s been almost 10 years since I actually played the game at great length. Great length indeed – this game is huge! Anyway I’m pleased to report that Alundra has won me over all over again.

(These dodgy lines were cut from the final game, but it gives an idea of Working Design’s unique localisation style)

What struck me most during my second playthrough is how insanely difficult it is. I mean wow, seriously: I was determined this go around to not resort to a walkthrough and I failed. The high difficulty serves as a great reminder that Alundra is not for everyone. However, it is quite possibly the perfect game for anyone who’s ever played a Zelda game (especially a 2D game like A Link to the Past) and came away wanting more of a challenge; I loved it. But if you find the difficulty of the Zelda series’ puzzles taxing, this will likely be a bridge too far.

Alundra has some of the most difficult, gnarliest puzzles you’ll come across in any game. It made me reflect on how few games contain well-designed, tricky puzzles. Experienced gamers are familiar with the “hardcore” platformers, your Super Meat Boys, your Ghouls ‘n’ Ghosts. Likewise, the “badass” character action games like Bayonetta or Ninja Gaiden. These are well established games and series that push players’ twitch reflexes (and patience) to the limit. Alundra is in a similar upper echelon, but with puzzles: Alundra is to adventure games what Battletoads is to platformers. Not for the faint of heart.

This is one of many diagrams I was forced to jot down when dealing with more complex puzzles. (The worst part is that all of it is completely wrong.)

So why is Alundra so tough? Often it’s a combination of two factors: mentally joining the dots and working out what you need to do, and executing it. Both of these can cause their own issues, as the puzzles are often mentally taxing in their own right, but then the execution relies on tight platforming and quick reflexes. Most puzzles are confined to a single room, and the game very rarely punishes you for failed attempts, both of which help. There are also occasionally bigger scale puzzles, similar to those found in the Zelda series if not quite as ambitious.

There were times during my replay when I would stop and stare at the screen incredulously: “that wasn’t optional??” Even very early in Alundra, the difficulty of the puzzles and the mentally taxing exploration gave me a feeling as if I were facing off my low-level party against one of those legendary, optional Final Fantasy bosses whose power easily surpasses that of the final boss. I struggled, and really strove to get through some of these puzzle rooms, only to learn that not only was I not going to get some ultra-secret optional weapon or item, but in fact I was merely doing the bare minimum to get to the second mandatory dungeon! Whether you like it or not, it’s certainly ballsy. 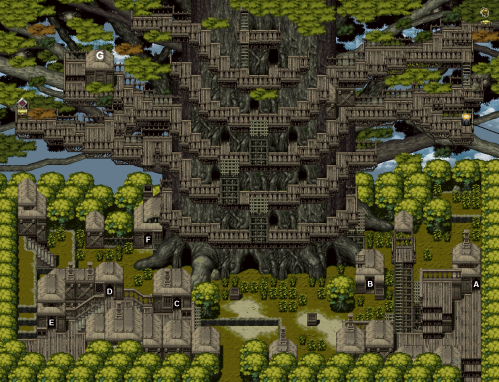 The multi-tiered Great Tree is one of Alundra’s more ambitious dungeons.

I can’t talk about the puzzles in this game without mentioning the utterly devious Ice Manor which can be accessed approximately halfway through the main adventure. It’s a series of just three rooms, each containing a single puzzle which opens the path forwards. In theory it ought to be a complete doddle. And, indeed, if you know exactly what to do the entirety of the Ice Manor can be completed in under 5 minutes. For us mere mortals (i.e. non-cheaters), however, the Ice Manor takes hours. Hours.

Everyone is familiar with the sliding ice block mechanic right? Well here it is, Ice Manor-style. It looks so simple, doesn’t it! Go on then, you figure it out.

All four switches – the two on the left and right, and two under the middle two pillars – need to be covered by a pillar. Ignore the raised switch at the top, you step on that once all the pillars in place to open the door.

All in all, I’m extremely glad for having returned to Alundra. In recent times I’ve played several good games, but great games have been wanting. It took a bit of time for the game to get its hooks (back) into me, but before long I was gripped. Of course it wasn’t just the puzzles that made this game such a pleasure – the environments are evocative of grand locations, both beautiful and derelict. I was reminded of Ico more than once.

The music also deserves a special mention. On my original playthrough I thoroughly enjoyed the music in the main village, but that was about it. However Alundra has more to offer: there is some generic, ambient material, but there are also a variety of tender pieces that recall the Final Fantasy soundtracks on the Super Nintendo. One of my favourites comes from a particular dream sequence, one of the game’s many high points. Would recommend.