Breasts are fascinating, aren’t they. You know something else that’s fascinating? Japanese idol culture. And the fact that both are front and centre (with the help of multiple push up bras) in this Shin Megami Tensei/Fire Emblem crossover makes for a boring, big boobed monster. I hate Tokyo Mirage Sessions ♯FE. Over the past few weeks it has become my most hated game of all time – I call it Tensei Megami Boobei because a) I’m trying to swear less, and b) it’s a game composed of IDOL BOOBS. 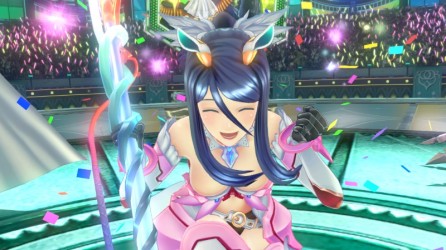 Let’s all say “boob job” together!

I’ve made no bones about the fact that the central flaw in the Persona series is not it’s Japanese-ness, but the fact it often feels like it’s tailored to satisfy the most ardent Otaku’s wet dream. It’s like the development team read my “weebo” post and decided to show me how bad it can get. Really guys, that post wasn’t written as a challenge!

Maybe it’s a matter of expectations too – I love Fire Emblem! And I love strategy RPGs. And, heck, I even like the Persona series, which is the biggest inspiration for TMS♯FE – when I squint past all the annoying dialogue and weebo-pleasing BS. It feels like the developers didn’t understand what made both series so great and felt they had to make a game that out Persona-d Persona. They’ve hid Fire Emblem as much as they could, shoving characters from the series behind the inane main characters whose goal it is to be idols.

Honestly, playing this you get the distinct impression that the moral/central message behind this game is to be cutesy, pretty, dance well and BECOME AN IDOL AT ALL COSTS! Because only through idol culture can you find THE REAL YOU, who is lurking behind all your cynicism, negativity, and ugliness (LET’S ALL GET BOOB JOBS, AND RHINOPLASTIES YEAH). It makes the Persona games seem deep. 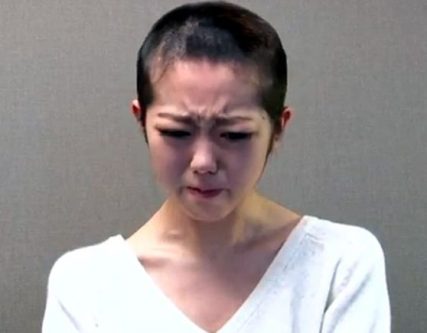 Photos of Minami Minegishi, 20, were emblazoned on national newspapers in 2013. The pop star had broken the band’s cardinal rule: No Dating. She shaved her head after a popular magazine published claims she had sex with a 19-year-old boy band member.

Some commentators have argued that the game exposes the “dark side” of idol culture – how exactly? To me this is a completely straight, uncynical endorsement of idol culture. If this is supposed to be a deconstruction or critique of idol culture where are the hair shaving side missions? Why is the antagonist not a peverted megalomaniac manager? Where are the frank discussions about anorexia and bulimia rife in the industry? Where is the Trauma Center inspired scene where Tsubasa gets her boob job?

Worse is the reception that this game has recieved outside of Japan. Some people are banging on about censorship – as if that’s the game’s real problem! One of the “censored” storylines is Tsubasa embracing gravure idol modelling – basically a form of soft core pornography, premised on being titillitating and alluring rather than “revealing all”. Yes, Tokyo Mirage Sessions depicts a young woman finding herself through glamour modelling. There is no character arc. There is no drama or conflict. Honestly – the storyline is that she struggles and eventually overcomes her inhibitions about posing sexily in front of the camera. That’s it. 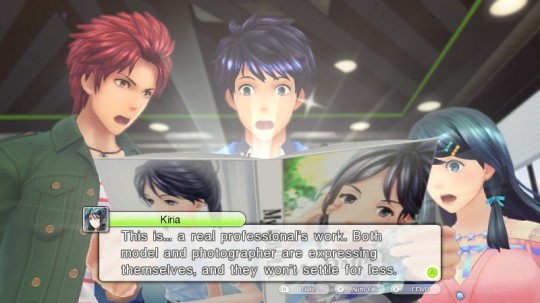 In the Japanese version, this is a gravure/glamour modelling magazine. Though it is edited, it’s bloody obvious what’s going on… one of the characters asks if he can be with the magazine alone ¬¬

This was edited outside of Japan to a more family-friendly “Tsubasa struggles to pose like Avril Lavigne” plotline. The “censorship is bad” argument seems to go: if only we could see ALL of Tsubasa’s breasts then the game would be a masterpiece. Underneath those digitally added clothes there’s an extra 10GB of code which makes the game good!

(This video makes a point that the ages of the characters have beeing raised, illustrating how some players really want to perve on underage anime girls -_-)

Even ignoring the pornographic elements – the fact that the developers had the GIFT of two successful series like Persona and Fire Emblem and decided to run with a storyline where one of the main characters have to embrace their sexy side and model to progress is… lamentable. There was so much potential in either of the series in terms of characters and settings, but instead the developers decided to go ahead with this cheap, gimicky and actively offensive fluff. Worse game ever.