I honestly can barely stand the Dualshock line of controllers. Hate is too strong a word, but I’m definitely Dualshock-averse. When I want to play a multi-platform game, I’ll nearly always avoid the Playstation consoles: I’ll pick the Saturn port over the PS1, Gamecube or Xbox over PS2, and Wii or Wii U over PS3, purely based on controller preference. Replacing the Dualshock has become my obsession lately, and I’m writing this post to share my journey. If I can help even one person through their own Dualshock nightmare, then it’s been worth it.

It’s extremely telling that out of the hundreds of knock-off, unofficial Playstation compatible controllers out there, not a single one replicates that awful buttoned d-pad. Sony clearly never got the hint.

My mission these past weeks is a simple one – to find a decent alternative to the Dualshock controller for my PS1 and PS2 systems. Specifically, I want a better d-pad to play some old fashioned shoot ’em ups that only came out on the PS1, including Gradius Gaiden and Harmful Park. The games themselves are somewhere between good and excellent, but I’m struggling to enjoy them with the Dualshock.

What’s so bad about the Dualshock? Mostly, it’s the directional pad. The d-pad buttons are tough on thumb pads, and while every successive incarnation of the Dualshock is slightly easier to use than its predecessor, none of them are comfortable. In fact, Sony are the only big player in the games biz who think a buttoned d-pad is a good idea – even Nintendo, who are currently barking up the same tree with the Switch’s joy-cons, treat the buttoned d-pad as an unfortunate compromise.

At first, I thought it would be easy to replace the Dualshock. But history’s forward march coupled with my limited budget closed many doors. That was certainly true of my first idea: an adapter. I wanted an adapter to convert a controller for another system into a PS1/PS2 controller. I’ve read online about adapters for the Sega Saturn controller, which sounds awesome in theory. Alas, I’ve not found any concrete evidence of this particular adapter’s existence.

My next consideration was an original Xbox controller adapter. I don’t know about the Xbox’s bulky controller, known popularly as “the Duke”, but I have two S model controllers that came later in the Xbox’s life and they’re pretty great. Being a contemporary of the PS2, I assumed there would be some kind of adapter on the aftermarket… Imagine my surprise to find that only a SINGLE Xbox to PS2 adapter was ever manufactured: the XP Joy Box. I’m guessing it wasn’t very popular, as this is yet another product I’ve been unable to track down – although I have verified its existence, which is already better than the Saturn adapter. By comparison, there must be millions of PS2 to Xbox adapters, manufactured by thousands of companies… it’s quite shocking to see the demand for using the Dualshock on other systems, and apparently none the other way round. 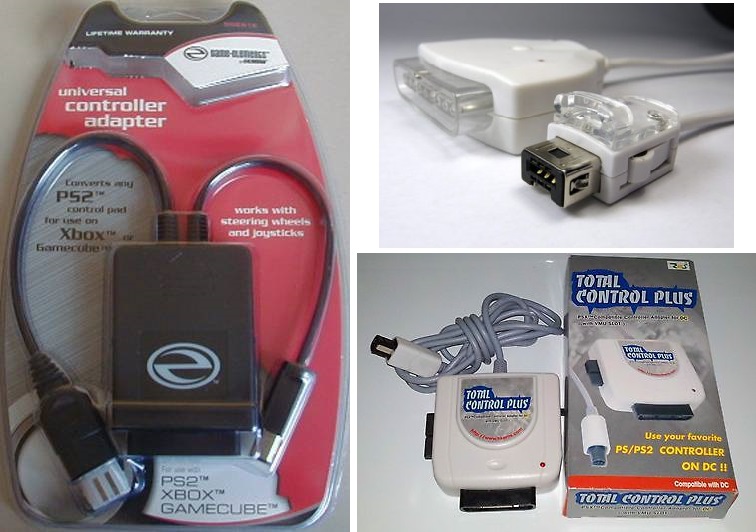 Dualshock on your Xbox, Gamecube, Dreamcast, Wii… it’s amazing what Stockholm syndome does to people.

Next port of call were unofficial controllers made for the PS1/PS2 itself. These fall into two main camps: controllers and arcade sticks. Ultimately, I don’t know the first thing about arcade sticks – hell, do I even like them? – which put me off. There are some arcade sticks by Namco, Konami and Asciiware for the PS1 specifically that I’ve seen recommended, but it’s a big investment.

That left more traditional, Dualshock-like controllers. These have a bad rep and rightly so. I remember feeling penalised whenever I got saddled with an unofficial controller at a friend’s house. Still, there must be exceptions, right? With systems as successful as the PS1 and PS2, it’s impossible to imagine there not being worthwhile third party controllers. Hope sprang eternal; the search began anew.

Like before, I hit upon promising leads that turned out to be dead ends. Most notably, Sega actually manufactured pads based on the Sega Saturn design for the PS2 in Japan. These are virtually identical to the original Saturn controllers, only with an added select button! Looking on eBay however, these things go for an insane amount of money: £200+ for a good condition pad in the box, or £100+ for a loose, second hand controller. (As good as the Saturn controller is, exorbitant prices like these suggest that it’s also rather over-rated these days.) 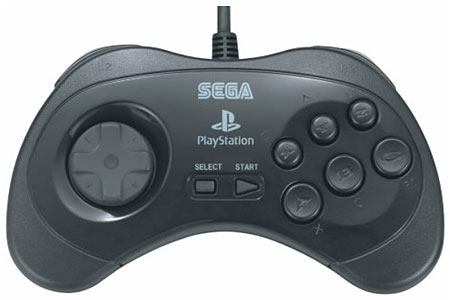 The gaming media reminds us regularly of those rare few gaming items worth a small fortune: the Nintendo World Championships, the Panzer Dragoon Sagas, the NES Classic Minis. You should probably add Sega Saturn PS2 controllers to that mental list.

Outside of the Saturn PS2 controller, which I resisted, were some promising leads. Several, in fact. My next post will discuss not one, not two, but three new controllers I bought to replace the Dualshock pad. I’ll look at their various pros and cons, as three controllers battle it out for the position of Playstation overlord!