I have a new year’s resolution: write more posts for the blog. And to achieve that I’m going to write shorter posts. I really outdid myself with my last post, and I think it partly explains why I’ve not been around. So with that said, let’s keep it brief(er than usual) here! Despite being busy these past weeks, I have somehow managed to play a crapton of games this Christmas/New Year break, including paying my old friend, Lords of Thunder, a long overdue visit. I’ve loved Lords of Thunder ever since it came out on the Wii’s Virtual Console service in 2008. After my Wii stopped working normally several years ago, I’d not been back to it. After some experimentation I was able to successfully initiate a Wii U transfer, which rescued my VC games and (to my surprise) all the save data too. That wasn’t the only surprise though – I was completely unprepared for the frankly incredible loading screen that accompanies a Wii to Wii U move.

Anyway, one of the first games I redownloaded on the Wii U was Lords of Thunder. As the title of this post states, I love it, and you’re about to read just some of the things I love about it.

Starting with the basics, I love the name.

I love the cheesy fantasy setting and that this game cranks it up to 11. I love the generic names: on the planet of Mistral, an evil god called Zaggart is challenged by our knightly hero Landis/Duran (there are conflicting reports about his name online, sorry), clothed in the magical armour of his ancestor Drac. I love that the hero is basically a fantasy themed mech – a cross between an armored knight and a Gundam – rather than a generic spaceship. I love that when you touch the bottom of the screen and there’s a floor there, your character’s legs will suddenly start moving at hyper speed, which reminds me it’s supposed to be a person and not a ship. I love the fantasy styled look of the HUD that looks like a golden visor.

I love the TurboGraphx’s trademark bright and bold colour palette.

I love that when you get close to an enemy your character attacks with a sword for extra damage. I love that the gameplay is blisteringly fast, including the speed of your playable character. I love that the enemies are equally zippy, not to mention diverse – little medieval looking men running around on the ground, knights with jetpacks flinging maces at you, and probably a hundred variants on the simple dragon. I love that the bosses are introduced first as tiny mages and sorcerers before they transform into giant mech beasts – that’s right, MECH BEASTS!

I love the cast of villains shown in the introduction. What a motley crew.

I love that the game lets you play the levels in any order like a Megaman game, and that each level is shown as a continent on a “world map”. I love that every level has a ludicrous sounding name attached to it: Dezant, Auzal, Helado, Bosque, Cielom, and my favourite, Llamarada. 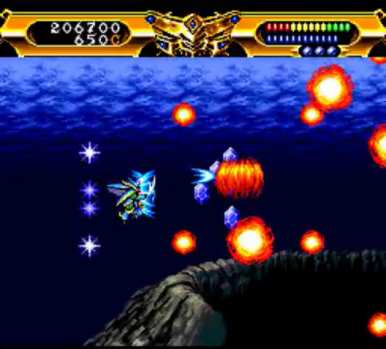 Llamarada is volcano themed, and I nearly forgot to mention that I love that.

I love that this game has a health bar, and shields available for purchase that let you survive multiple enemy hits.

What I’m trying to say then… is that Lords of Thunder is a half-decent game and you may want to look into it. It’s very accessible for a shooter and is completely silly.