Happy New Year everyone! I have very few traditions on the blog but this is one I enjoy, always a fun way to kick off the new year. Alas here I am with preparing for my only end of the year tradition and I discover I didn’t even do one of these for last year, 2017! *sigh*

Never mind though and we’ll press on in the spirit of renewal. 2018 was a bit of an odd one: an unreasonably large number of the games I played in the first half of the year were disappointing. A lack of inspiring games is partly why I blogged very little – my socks just weren’t being consistently rocked by the stuff I was playing.

Then in the second half of the year things changed when I finally picked up a Switch. At the same time, reluctantly, I packed away my old CRT TV. Some weeks later I decided to re-dedicate myself to blogging, and since then I’ve been more thorough than ever before in terms of my output, writing about most of the games I played these past few months.

Given my journey this year and how consistent I’ve been with blogging lately, all of the games featured here I played in the first half of 2018, prior to my Switch purchase. Enough pre-amble, bring on the highlights!

This was an odd one alright. Ha ha… yeah, I’m not joking. This is a 3D platformer/first person shooter hybrid in which your bullets are living critters. It’s a highly ambitious game that flopped on the original Xbox, and despite some flaws I mostly enjoyed it. I’ve got to give the developers credit, the (Odd)world is consistently compelling. In Stranger’s Wrath you play a silent-type cowboy who moves between various towns rounding up bad guys and collecting bounties. From low-key beginnings, the story takes some great twists and turns, and the gameplay builds to a satisfying and bombastic finale. 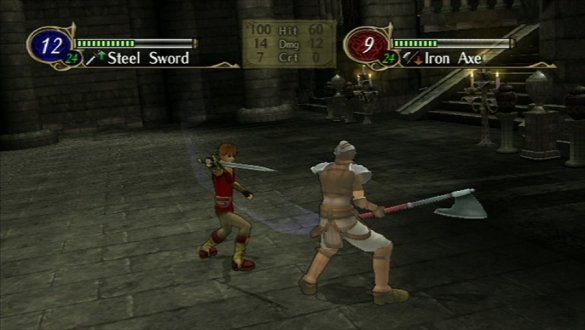 This is a bit of cheating, since I first played this back on release. But I didn’t fully appreciate it at the time. It’s the follow up to Path of Radiance, a game Maya raved about previously. And believe me she was set to rave about this when she played it earlier this year. In the absence of her rave review I will give it a go. Radiant Dawn is an ambitious title that goes in very different directions to the prequel (at least in terms of its story). While the gameplay is still the same classic Fire Emblem strategy role playing, Radiant Dawn has three separate campaigns, with three distinct playable parties. It’s a bold move for sure, one I started questioning when it came to a mission when two of my parties were forced to fight each other!

The creative decision paid off ultimately though, thanks to a really, really intriguing plot that kept me invested right to the very end.

I’m sure we’ve all had at least one experience like this with a Japanese game before (sorry – it’s always the Japanese ones): a few hours in and you like the characters, the main character is a bit boring but they’re sincere, kind. The plot’s OK, something about mercenaries striving to become royal knights, power of friendship or something. Nothing too wacky. Then by the end of the game you’ve drunk sacred water from the Tree of Life, visited the Netherworld, destroyed a ghost asteroid, killed Norse gods, taken a dump on fate, and learned the purpose of life and why humans were created. Sound familiar?

Now, Radiant Dawn does have a trajectory not completely dissimilar to this. And yet, somehow, even when things go batshit crazy, it works. It makes sense, and it’s beautiful.

My only complaint about this game is that it’s hard. (I wish I had played it on Easy.) Not only are the battles hard, but there are secret requirements for getting additional plot content that are extra hard. Not only that, but there is even more additional plot content only available during New Game+. (I wish even more I had played New Game+ on Easy.)

Honestly, much as I enjoyed it I didn’t have much to say about this one. It’s a really cool, well-done first person platformer. It’s intense platforming from this perspective, but you will eventually get used to falling to your death from the rooftops of high rise buildings! Nothing beats the satisfaction of nailing a perfect parkour run.

Now for something different! This is a 2D bullet hell shooter that provides several new twists on an well-established genre. For starters there’s a leveling up mechanic where you gain experience and level up by comboing enemies. The other thing that makes Mars Matrix unique is that there are no penalties for touching enemies. Your ship’s fire is also much more effective up close, and enemies unload wave after wave of bullets if allowed to survive for more than a second on-screen, meaning you are encouraged to move your ship across the entire play area.

These may sound like relatively small changes, but in practice Mars Matrix feels less like a traditional shooter and more like an incredibly intense, reflex-based puzzle game. It’s a mesmerising experience and I’d thoroughly recommend it. 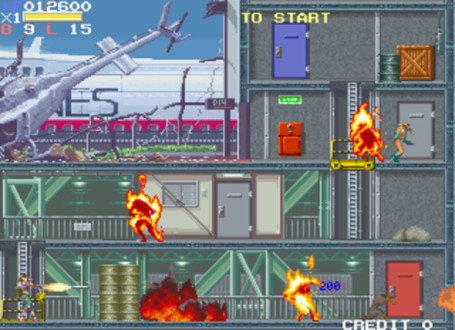 We’ve got just enough time for one final unique gem! This is another minor cheat since I first played this a while back on the Taito Memories 2 collection on PS2. That’s a great collection overall, but although Elevator Action Returns is playable it’s marred by slowdown and slightly blurry graphics. (Come to think of it, that might be a PAL 50hz issue but I haven’t looked into it.) Anyway for that reason I decided to look into the Saturn port which, it turns out, looks lovely and runs smoothly.

Elevator Action Returns is a mid-90s reboot of the original Elevator Action, a popular(?) arcade game released by Taito in 1983. As far as mid 90 arcade games, I don’t know of anything like this. It’s a complete anomaly and there’s nothing really obvious I can compare it to other than Bonanza Bros for the Megadrive/Genesis, if anyone has played that.

Like in Bonanza Bros, the goal is not to kill everything (that would be impossible due to respawning enemies) but simply to enter all of the red doors in a stage. As the name suggests, manipulating elevators is a central mechanic. Elevator Action Returns goes beyond the original game’s monotonous office settings, encompassing sewers, an airport, and various other industrial sites.

The characters are heavily animated, with slow and measured movements. You take elevators up and down, slaughtering fedora-ed terrorists and robots alike and entering every red door you see. It’s a fun game solo, but Elevator Action Returns comes into its own as a two player co-operative experience. The satisfaction of this game is similar to blasting enemies with a pal in something like Contra, but minus any stress and intensity.

I’m struggling to describe it so I’d best let a video do the talking here at the end. Jeremy Parish has also covered this game for Retronauts, and he calls it ‘one of the greatest arcade games of all time’. I can’t disagree with that. As with all the games in this post, Elevator Action Returns comes highly recommended.

Thank you for reading my best games I didn’t blog about post for 2018, happy gaming and all the best for 2019!