It’s practically criminal, the extent to which I’ve ignored the N64 on this blog. As a youngster, I tasted the fruits of various consoles at friends’ houses: PS1, SNES, NES, Megadrive and Saturn. But, at home, my gaming diet consisted of the Amiga and Gameboy. This all changed in 1998. It was the year I got the N64. The year that my life changed forever.

But enough of that for now. I hope you will indulge me with some nostalgic ponderings on the topic of Snowboard Kids, one of my favourite snowboarding games back in the day. I say one of, of course, because 1080 Snowboarding is also excellent although it travels a more realistic icy path than Snowboard Kids. In practice Snowboard Kids is much closer to a series like Mario Kart than SSX or 1080. This game is also notable as an absolute memory card hog. In fact that’s largely why I’ve decided to make this a series of posts on N64 games, since I had to delete all of my precious game saves to play this game. (Only Rayman 2 survived the cull.) Where the N64 is concerned, you take the good with the bad, I guess.

Snowboard Kids is a very simple game. Unusually for a racing game, there are times you actually don’t do or press anything, since your boarder accelerates automatically. There’s no turbo or boost button to manage like in 1080, so you only have to steer and occasionally jump. You earn money for pulling off mid-air and picking up coins, which you spend when you pick up weapons and items along the track. No money, no item, and you crash into the item/weapon box. It’s a nice wrinkle but it’s very easy to get money, so it barely comes into play in races. Like Mario Kart, the weapons and item pick-ups are different depending on your position in the race (best weapons at the back, worst at the front). But with only four characters in the race including yourself coupled with the game’s rather leisurely pace, races are a lot less frantic and manic than Mario Kart.

That damn ski lift will be the bane of your life, or your saviour.

The exception to the game’s slow pace is the ski lift. At the end of each lap, all the racers have to go, one-by-one, into the ski lift which carries you back to the start of the course for the next lap. Attempting to get the lift has inevitably unpredictable and therefore hilarious results almost every race, as a well-timed weapon can easily see you moving from last to first or vice versa. No matter how good you are at the game it’s still very possible to be trumped at the lift, only to have to scramble for the dignity of getting a seat on that damn thing in any position other than last place.

You might be wondering then how this game manages to distinguish itself from other racers. There are a decent variety of tracks which have you boarding through a farm, a theme park, a quicksand valley and a land of ninjas(?!). The tracks get progressively harder and more intense, and each require the use of a different character and board to take advantage of the tracks features. Lots of straights and no sharp corners requires a fast character and fast board, whereas a twisty turny course needs a slower character and board with good enough handling. The later stages are really hard and the AI becomes more difficult (aka more cheating/rubber-banding), so good luck with that!

Introducing Slash, one of the game’s six bizarre looking playable characters. On the NPC side is a shopkeeping dog, who spends his spare time hot air ballooning around mountains, theme parks and deserts, counting down snowboard races. A bit like the teacher in Battle Royale.

Then there are the weapons and items, which are pretty well-balanced. You get a bit of warning when you’re about to be attacked, so you can dodge or jump over most attacks if you’re lucky with timing, and it’s even possible to reflect attacks back at the attacker if your timing is good. Otherwise an item that turns you invisible lets you dodge any attack (especially useful when you’re in the first place). Attack-wise you can lay traps by placing rocks in narrow parts of the course or, on a part of a course with no sides, you can turn your opponent into a snowman so they run off the course and lose lots of time. Another cool one is with the parachute weapon, which sends characters flying into the air only to drift down to the ground slowly: if you can hit someone with the parachute just before a big jump, they will float for double or even triple the time, easily screwing them over for the lap at least. It’s a beautiful sight.

It’d be remiss if I didn’t mention the great music. Stuffed with arpeggios, it’s techno-lite with a nostalgic twist and I love it. Here are my favourites of the bunch, with racing footage in the first video here to boot:

The music is essential to Snowboard Kids’ charm, especially in those moments in races where you’re not really doing much other than light steering. The slow pace holds this game back a bit I feel (admittedly I’m playing the PAL version so in part it’s my own fault for being born in Europe), but the game still has plenty of charm to recommend it. And charm really is this game’s strength, both in its gameplay and presentation. Ultimately, Snowboard Kids reminds me of Mario Kart’s best feature: namely that underneath its child-friendly appearance and accessibility, there’s a surprising amount of depth and attention to detail. 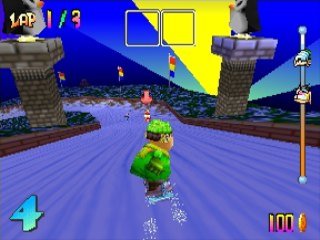 Introducing the tubster of the group, Tommy. He’s crap on turns and tricking, but all of that mass plus gravity makes him a very speedy boarder.

There is, of course, Snowboard Kids 2. The sequel. But unfortunately it wasn’t released in PAL regions with the exception of Australia so I’ve never played it! It’d be nice to try it though, since on the face of it at least the sequel looks like an all-round improvement on its predecessor. SK2 is a late N64 game, and the graphics reflect that, which is nice since the first game is no powerhouse. But that’s for another day, and I’d like to focus on games I actually played back when for now at least. Snowboard Kids didn’t define the N64 for me when I was a young ‘un, but it was a genuine sleeper in my collection that I got plenty of mileage out of. I declare this game “cool”.