Back again, and it’s the same deal as last time. After the last post, I felt even more strongly the importance of putting out these posts given some of the gems I experienced this year. Part two has arguably fewer interesting titles than part one, but I know I’d regret it if I failed to report on Disaster: Day of Crisis at least. Let’s go and save that girl!

This game… ever since it came out it’s had this aura… the “they pulled a Sonic” aura. As a result I went into Other M with low expectations, and turned out to be pleasantly surprised. The story, which Metroid fans kicked up a fuss about, is silly nonsense, but not in a bad way. Really, I’m just not invested enough in the Metroid series or Samus as a character to care one way or the other about how her depiction contradicts or confirms her character in other games. The cutscenes are very impressive to look at, they also aren’t overly frequent nor long, plus, if you look past the campy elements, the story is surprisingly decent.

Beyond its “controversial” aspects, the game is very fun and satisfying. The speed of the gameplay is a joy after years of Metroid Prime games (which, thanks to this game, I’ve realised I’m not a fan of), and the action is satisfying and intense. The only complaint I can make about this game is that exploration is a bit lightweight, particularly compared with previous Metroid games. But I can hardly fault the game when the final experience is so streamlined and elegant.

I was always curious about this game, but my interest in it increased dramatically after playing Xenoblade Chronicles at the start of 2015. I had a question: “How did Monolith Soft go from Disaster to Xenoblade?”. I don’t know that I really came up with an answer to that question. The two games for the most part look and feel completely different from one another. Still, I did learn that Disaster is a pretty fun game, if rather shallow.

It’s certainly funny, thanks to a bevy of cliched Hollywood action film tropes from start to finish. To give just one example, there’s a “defuse the bomb” portion of the game during which you wield pliers and dramatically agonise over which wire to cut, the red one or the blue one, while another character radios instructions to you through the Wiimote speaker. I could also mention the frequently hilarious dialogue, which sees the main character reiterate numerous times, despite his habit of disrupting terrorists’ plans for initiating a nuclear war, that his sole goal is to save “that girl”! (I may have made this up in my mind, but I’m pretty sure there’s even a scene where our boy Ray tries to exchange a nuke in his possession for the woman he wants to save – talk about desperate!)

So I have to admit, I had an idea of doing a “comparative Crisis” post, which as the name suggests would see me comparing Incredible Crisis with Disaster: Day of Crisis, based solely on the shared use of “Crisis” in the titles (don’t mention the Time Crisis or Dino Crisis series…). The idea worked insofar as it got me to play through both games to completion, but that’s about as far as I got. I worked on a post but never finished it, because despite the arbitrary decision to compare them, it turns out these two games are practically identical. We might as well go ahead and refer to this as Disaster’s spiritual prequel. Brothers from another mother.

OK, so there are some differences. Where Disaster takes itself immensely seriously, Incredible Crisis is very, very tongue-in-cheek. But like Disaster, Incredible Crisis is a minigame collection set in and around convoluted disaster situations. One of the funniest situations involves a true or false quiz in an ambulance, where the protagonist is trying to prove he’s conscious to hospital staff. To prove you’re conscious involves answering a total of ten questions correctly, without being wrong too many times. Some of the questions are simple arithmetic and geography, while others give you ten seconds to decipher an impossibly long maths question, or to multiply numbers in the thousands. Such absurd questions all but guarantee your answer is pure guesswork, and the game revels in a similar sense of cheekiness throughout the game. Another minigame sees you massaging a young lady on a ferris wheel, filling up her “pleasure metre” while (in)appropriate groaning sound effects play. In typical fashion, later you discover this same young lady is a terrorist bent on world destruction.

There’s also the soundtrack for this game. Composed and performed by Tokyo Ska Orchestra, I’d recommend giving it a look. Plenty cheerier than the Hans Zimmer-esque tunes in Disaster! 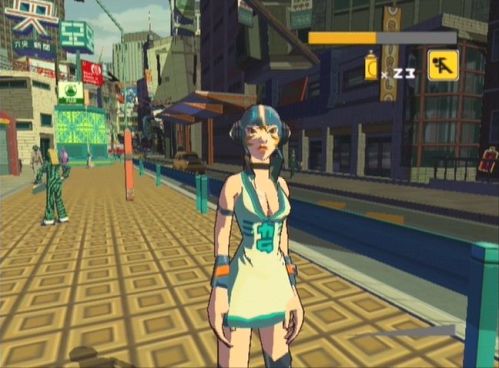 What’s to be said about JSRF? I greatly enjoyed the original for Dreamcast, and the sequel was no different. Despite sharing a lot aesthetic-wise, Future changes things up substantially from the original Jet Set/Jet Grind. Time-based levels in the original are open-world in the sequel, and the trick mechanics are also greatly expanded. While that does bring a few small drawbacks (sometimes you just want to menu click to a specific area but you have to travel manually), in general I think the game really benefits from being open. Several locales in the game feel similar to levels in the original, only expanded. You could see that as laziness on Smilebit’s part, but I was very happy to see those environments return in some fashion – they are just so damn good!

One of the bigger changes is with tricks, which play a more integral role in this game, and there’s a cool new timing element that gives you more control over when and what tricks you pull. Altogether, the changes to the game make Future feel closer to the Tony Hawk Pro Skater series than the original Jet Set Radio – no bad thing in my book. Recommended.

That is the end of this brief series of posts, and while there were several other games I played for the first time in 2015 which I didn’t blog about *cough* Symphony of the Night *cough*, these are the cream of the crop, the games on top. Will the Ghost of Games Past pay another visit in 2016? Wait and see…