I detailed my gripes with the Dualshock controllers waaay back when in part one, so if you want to know more about my quest for a Dualshock-killer, go read that. Now then, here’s my long overdue review round-up of three Dualshock alternatives. All of these were purchased with the intention of replacing the Dualshock and its tragic excuse for a directional pad. So, to put these controllers to the test I played a pair of classic PS1 shoot ’em ups, Gradius Gaiden and Harmful Park, that require pixel perfect moves with a d-pad.

My search brought me first to the Hori Fighting Commander 10B, a controller made originally for the PS1 and never released outside of Japan. It’s not a dire pad, although it has significant issues that mean I can’t recommend it. The biggest problem is the d-pad – unfortunate since that’s my number one priority! It’s still more comfortable than the Dualshock’s d-pad, but when pressing hard in certain directions the d-pad sticks down. I opened it up and put on some lubricant. Helped a tad, but not much. After a bunch of sticky pad deaths in Gradius Gaiden (that just sounds wrong doesn’t it), I started to get a feel for when it was about to stick. It’s predictable enough so I found myself mentally babysitting my thumb to avoid those sticking points. It’s certainly distracting and annoying. 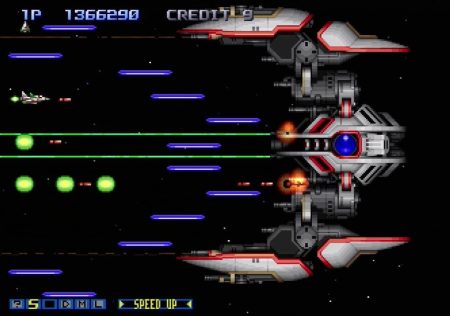 Some situations you really don’t want a sticky d-pad.

Besides that, the controller is fine. Everything is a little stiff and clicky but totally inoffensive. Obviously the first thing you notice looking at this is are the insane number of switches on the controller with turbo and hold settings for every button, plus a “slow motion” switch which constantly pauses and unpauses the game. It’s total overkill (how often would you need to turbo mash L2 or R2, for instance?!), but neat to have. All in all, I was disappointed with this one. After a week or so trying and failing to get rid of the d-pad’s stickiness, I threw in the towel and restarted the search for a Dualshock replacement.

The next controller I tried was a big improvement despite some bizarre aesthetic choices. It’s a Street Fighter 15th anniversary pad for PS2 which is clearly modelled on the Sega Saturn controller… well, apart from the whole faux-3D hologram image of Street Fighter’s Ken. This is the only controller of the bunch that was definitely released outside of Japan, so I’m happy to report that it’s good, and Japan doesn’t get all the best stuff exclusively. The d-pad is a significant upgrade over the Hori Fighting Commander, not to mention the Dualshock. It’s surprisingly soft to press, so it’s very comfortable over extended sessions. Plus it doesn’t stick(!), so it’s not at all distracting. Like the Hori controller, this has six face buttons with the R1 and L1 buttons brought down from the shoulder position.

The only downside of this controller is the size of the buttons. They are really big! The controller itself is surprisingly chunky too, which means the square and X buttons are slightly uncomfortable for me to reach. I’ve been configuring controls in-game to adjust for that – moving the fire button to R1, for instance. Still, thanks to its very good d-pad, overall this controller was a pleasant surprise and a fine Dualshock replacement for the kinds of games I like.

Final one on the list is a straightforward Dualshock substitute – nice for a change. As such, it copies the Dualshock’s traditional layout, complete with analog sticks and four shoulder buttons. The one added bonus is turbo functionality, which can come in handy occasionally. This is the Rensha Controller 2 from an obscure Japanese company called Cyber Gadget. I’d never heard of the company before but the controller seemed so good in a Classic Game Room review that I had to track one down!

I was initially sent the PS3 model of this controller. The PS2 and PS3 variants are virtually identical so make sure you check the connector if you’re going to get this one! I tried it with some PS3 games – Shovel Knight and Gradius V specifically – but I struggled to make direct comparisons with Gradius Gaiden and Harmful Park on PS1, the games I tested the other controllers on. Eventually I was able to replace the PS3 model with the older PS2 version.

Now I’ve had time with both variants, I can vouch for both. This controller is strong all-rounder with no obvious flaws. The d-pad feels similar to the Hori pad only less rigid and, thank God, not sticky. You have to press a bit to register movement, and it’s not as gentle as the Capcom pad, but it’s still good. The best thing about this controller though is the face buttons. They aren’t overly large like the Capcom pad, and they feel nice and high quality. Also, since I’m not using any of these controllers for fighting games, I like that this controller copies the Dualshock layout. One of the games I’ve tested with, Harmful Park, uses the Dualshock’s four shoulder buttons as shortcuts to instantly swap between weapons. The Capcom controller obviously can’t do this as easily. Point is there’s never any need to fiddle with the settings. 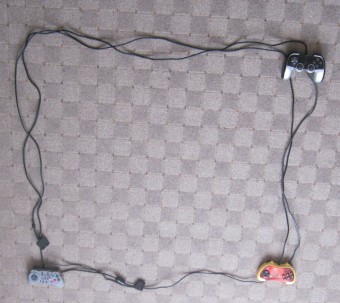 I’m very happy with both the Cyber Gadget and the Capcom controllers. Both are fit for purpose, and I will use both depending on circumstances. For pure d-pad comfort, the Capcom controller comes out on top. However it is also a very quirky controller in its own right: overly large and almost weightless, with large toy-like face buttons and weirdly small shoulder buttons. The Rensha pad is a much more conventional design, with good (if not great) quality all around. And that is really what I’ve been looking for – a good controller to use for two of the very best consoles of all time, the Playstation 1 and 2.